The interim agreement on Iran's nuclear program is seen by many as a milestone, but not in Israel. The government there is especially strident in its criticism. An angry response from Israel to the interim agreement between world powers and Iran did not take long in coming. While the negotiators were still patting themselves on the back in Geneva and speaking of a "historic" agreement, Israel was already reacting with massive criticism.

For the most part, Netanyahu's cabinet agreed with him. Foreign Minister Avigdor Lieberman spoke of "the greatest diplomatic victory of the Islamic Republic since the Khomeini revolution." Others compared the situation with the Munich Agreement of 1938, which led the way to World War II and the Holocaust.

Only President Shimon Peres called for restraint, perhaps with especial regard to the strained relations with the US. Peres pointed out that this was only an interim agreement and that one should judge it on its results, and not on its words. 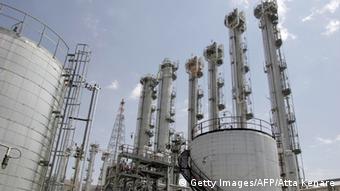 Under the deal, construction work on Iran's Arak reactor is being stopped

The agreement was seen in a more differentiated way in the Israeli press. "Like every other country in the region, Israel will have to get used to Iran's new status as a nuclear threshold power," wrote the journalist Nahum Barnea in the Israeli daily "Yedioth Ahronoth." It may not be good but it wasn't the end of the world, he wrote. Any Israeli, whether a nuclear expert of not, would understand that.

In another paper, "Ma'ariv," Nadav Eyal wrote that this isn't "Israel's Munich in 1938, nor is it the Treaty of Versailles for the Iranians." The agreement is better than a continuation of the current situation, he said, pointing out that the agreement comes during Netanyahu's watch. The prime minister had made the Iranian nuclear program a top priority and kept on saying that it represented an existential threat to Israel. Israel was left alone with that view - if anyone agreed, it was Saudi Arabia and the other Gulf states.

Meir Javedanfar, an Iranian-Israeli analyst, argues that the position of the Netanyahu government isn't surprising, but it's also not constructive. "The government speaks on my behalf when it talks about stopping Iran from building a nuclear weapon," he said, "but it doesn't speak for me if it rejects every step towards a diplomatic solution. This agreement at least ensures that Iran can't build a bomb while they are talking to each other. We ought to give that a chance."

Javedanfar sees it as positive that the international inspectors will be allowed to make daily visits, and that construction work on the Arak reactor is being stopped. But what is decisive is what happens in the next six months. 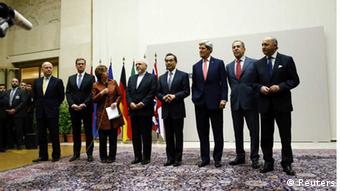 "The agreement is not a reason for celebration, but isn't an absolute disaster either," said Emily Landau, Iran specialist with the Institute for National Security Studies in Tel Aviv. But she warns against lifting any further sanctions - after all, sanctions are the only reason Iran is talking at all.

"We'll have to watch over the next six months to see how the details of the agreement are negotiated. The Iranians will challenge every clause and say, 'No, we didn't agree to that - you've understood that wrong.'" And, she added, they'll try to have further sanctions relaxed.

But it's the relaxation of certain sanctions which has angered Netanyahu the most. He says that they have been built up over years, only to be dropped in exchange for "cosmetic concessions." Western politicians have let themselves be fooled by the charm offensive of the Iranian president, Hassan Rouhani. It was only a few days ago that Iran's Supreme Leader, Ayatollah Ali Khamenei, described Israel as a "rabid dog."

Now that the agreement has become a reality, goes the official Israeli line, Israel should use the next six months to help ensure that Israel has an influence, politically and "in other ways" on the coming negotiations. One of the elements in that policy will have to be to improve the relationship with the US.

President Barack Obama offered Netanyahu immediate talks about the Iranian nuclear program during a telephone call on Sunday (24.11.2013). It's not clear whether the call appeased him, but Netanyahu repeated that Israel did not feel bound by the agreement.

There was relief in Germany after the news broke of a breakthrough in negotiations with Iran over its nuclear program. Many only see Sunday's deal as a first step, but the German economy could benefit in the meantime. (25.11.2013)

After years of deadlock, Iran reached a compromise with the West on its contested program of uranium enrichment. Experts say that the deal may spur on domestic reforms sought by moderates in Iran's government. (24.11.2013)