A manslaughter conviction against an Israeli soldier who shot dead a wounded and unarmed Palestinian has been upheld by a military court. The case deeply divided Israelis, with some seeing the soldier as a hero. 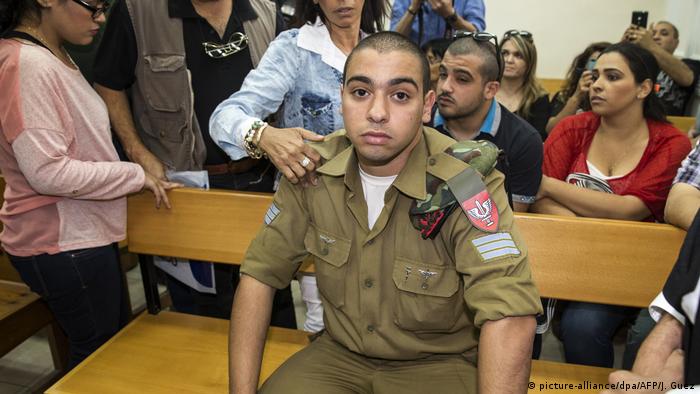 An Israeli military court Sunday upheld a manslaughter conviction and 18-month prison sentence against an Israeli soldier who fatally shot a Palestinian attacker while he lay wounded and unarmed on the ground.

Israeli media reports say that Sgt. Elor Azaria's appeal gave the court no grounds to overturn his conviction. But the court also rejected an appeal by prosecutors to lengthen the sentence to up to five years.

"Values have been greatly damaged by the defendant's actions," the chief judge, Major-General Doron Feiles, said in reading out the ruling. "This was a forbidden and immoral act."

The verdict is seen as victory for military commanders who want to preserve the army's vaunted code of ethics. But the initial trial, and the verdict which came down in January, deeply divided Israelis. Hard-line conservative politicians slammed the conviction, and painted Azaria - a 19-year-old army combat medic at the time - as a hero who was being persecuted.

But a cell phone video showed Azaria fatally shooting Palestinian Abdel Fattah al-Sharif, 21, in the head as he lay wounded on the ground and unarmed. Minutes earlier al-Sharif had stabbed an Israeli soldier with a knife in the turbulent West Bank city of Hebron.

The attack occurred in 2016, during a particularly tense time with frequent Palestinian attacks.

An eruption of violence

A wave of Palestinian violence erupted in 2015, and at times was a daily occurrence.

Since then, Israeli forces have killed more than 256 Palestinians. Israel has said that most of them were attackers, while others reportedly died in clashes.

In the same period, Palestinians have killed 48 Israelis, two visiting Americans and a British tourist in stabbings, shootings and car-ramming attacks targeting civilians and soldiers.

The Palestinian government slammed the 18-month jail term as too lenient, saying it had given Israeli soldiers a "green light" to kill with impunity. Israeli law allows for a maximum 20-year sentence for a manslaughter conviction.

"Upholding the conviction of a soldier convicted of fatally shooting a man who posed no threat sends an important message about restrictions on lethal use of force," said Sari Bashi, Israel and Palestine advocacy director for the rights group.

But Prime Minister Benjamin Netanyahu and Defense Minister Avigdor Lieberman have called for the ex-soldier to be pardoned.

After his arrest, Azaria spent months confined to his base. Upon his discharge from the military two weeks ago, he was placed under house arrest.