Israel has launched a large-scale rocket attack on several Iranian infrastructure targets in Syria. The strike comes after Israel accused Iranian-backed forces of firing at their frontline troops in the Golan Heights. 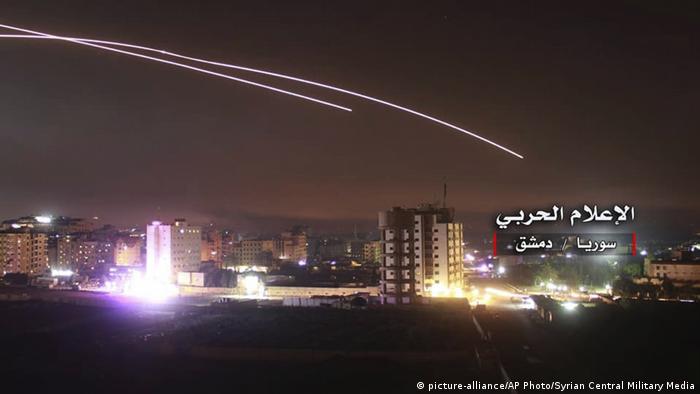 Israel on Thursday launched one of its largest military operations in recent years, and its largest raid to date against its bitter regional rival Iran.

The retaliatory strike came after Israel accused Iranian forces in Syria of firing 20 rockets at Israeli front-line military positions in the Golan Heights.

"They need to remember the saying that if it rains on us, it'll storm on them," Lieberman told a security conference. "I hope we've finished this episode and everyone understood."

France and Russia call for de-escalation

French President Emmanuel Macron was the first international leader to call for "de-escalation." At a ceremony in Aachen, where he was awarded the Charlemagne Prize for European unity, Macron spoke to German Chancellor Angela Merkel about the strikes in Syria.

Merkel, for her part, called the latest escalation a matter of "war and peace."

Russia, an ally of Iran, also urged all sides to dial town tensions. "This is all very alarming, it causes concern," Russian news agency TASS quoted Deputy Foreign Minister Mikhail Bogdanov as saying. "There should be work to de-escalate the tensions."

A series of retaliations

The strike triggered air raid sirens in the Israeli-controlled region, which was captured from Syria in the 1967 Six-Day war and was annexed by Israel in 1981.

Residents spent the night in shelters, but schoolchildren went to class as normal the morning after. Israel claimed that none of the Iranian rockets struck inside Israeli-held territory, and that they either fell short or were shot down.

The attack on the Golan Heights came one night after Syria accused Israel of striking one of its military bases south of Damascus, which the Britain-based Syrian Observatory for Human Rights said killed 15 people including eight Iranians.

Israel has largely sought to remain on the sidelines since civil war broke out in neighboring Syria in 2011. It has, however, admitted carrying out some 100 smaller airstrikes on Syria over the past seven years, namely targeting Iranian weapons shipments bound for the Lebanese militant Hezbollah.

However, with the Syrian civil war winding down, Israel has stepped up its response against Iranian forces looking to establish a foothold on its doorstep.

Defense Minister Lieberman told the Herzliya Conference, an annual security gathering north of Tel Aviv, that Israel would not allow Iran to turn Syria into a "front-line base" against Israel. "This is the policy, a very, very clear policy, and we're acting according to this policy," he said.

Video footage purportedly shows UN peacekeepers knowingly allow a jeepload of Syrian police officers to drive into a fatal ambush. The footage has been described by a UN spokesman as "disturbing." (28.04.2018)

The story of Western intervention in the seven-year Syrian civil war is one of missed opportunities. In responding to such conflicts, the West must learn from its past mistakes, says DW's Kersten Knipp. (15.03.2018)