Palestinian President Mahmoud Abbas has reached an agreement with Israel. According to the deal, tax revenues collected by Israel for the Palestinians will be transferred after a three-month freeze. 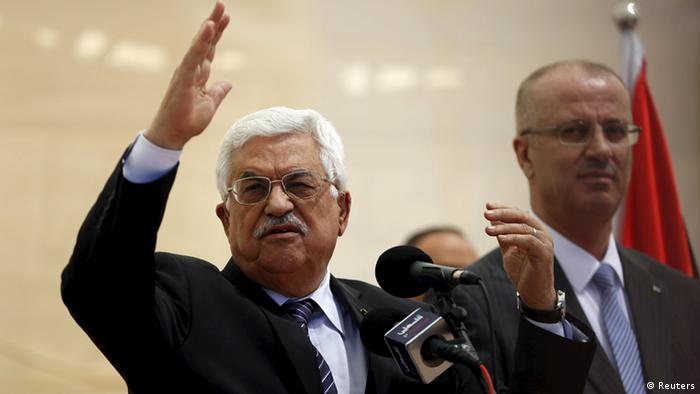 "There is an agreement, the money will be sent in full," Palestinian President Mahmoud Abbas (photo) confirmed on Saturday. According to the Palestinian prime minister, Rami Hamdallah, the taxes Israel collected for the Palestinian Authority and froze for a period of three months amounted to almost half a billion US dollars (roughly 463 million euros).

No further details were provided about the negotiations.

Israeli media reported that the transfer would take place on Monday.

Israel froze the tax transfers in January, after the Palestinians applied to join the International Criminal Court (ICC). The Palestinian Authority formally joined the ICC on April 1.

At the beginning of April, Israel agreed to release the funds after deducting debts due for electricity, water and medical services. The Palestinians rejected the proposal and insisted on full payment. The Israeli newspaper Haaretz reported that the Palestinians agreed on the deduction in the end. However, the Palestinian news agency Maan wrote that the debts for electricity and water had to be re-examined by a committee consisting of both Israeli and Palestinian representatives.

In the past, transfer freezes have been imposed many times, but they have rarely lasted more than one or two months. An exception occurred in 2006, when the Islamist movement Hamas won a landslide victory in Palestinian legislative elections and Israel withheld the funds for six months.

Palestine has formally become a member of the International Criminal Court. One of Palestinian leaders' first steps was to authorize the body to investigate possible war crimes committed in Gaza. (01.04.2015)

Two decades of Palestinian security cooperation with Israel are in doubt after the PLO's central council called for terminating the partnership. President Abbas's administration will decide on implementing the move. (05.03.2015)

The UN has warned of a "downward spiral" in Israeli-Palestinian ties, urging both sides to bridge divisions. Israel's withholding of tax revenues comes in response to the Palestinian bid to join the ICC. (15.01.2015)