Media reports suggest that Israel is considering the purchase of two sophisticated German warships. However, it is unclear who will foot the bill for the multi-million-euro deal. 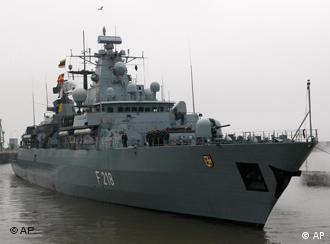 The ships might be supplied by Hamburg's Blohm + Voss shipyard who confirmed an Israeli enquiry to German media without divulging any further details on the potential deal. The ships' weapons would be supplied by the United States.

The two state of the art corvettes, which are hard to detect by radar, are said to be larger than Israel's current flagship Hanit.

The Israeli navy wants to install a "Barak 8" missile defence system on the two vessels along with sophisticated radar so as "to be prepared for potential wars", according to the Israeli daily newspaper Ma'ariv.

The move would allow Israel to shift a part of its missile defense system to the sea, rendering it less vulnerable to potential rocket attacks.

Two further submarines are currently under construction in Kiel, costing at least 500 million euros apiece. Germany is to foot a third of that bill.

The long road from Auschwitz to Jerusalem

German lawmakers vow to step up fight against anti-semitism