Israel imposes new sanctions against Palestinians | World | Breaking news and perspectives from around the globe | DW | 12.04.2014

Israel has announced further sanctions against Palestinians after more international conventions were signed. Experts hope the sanctions won't be carried out so that the difficult peace talks can continue. 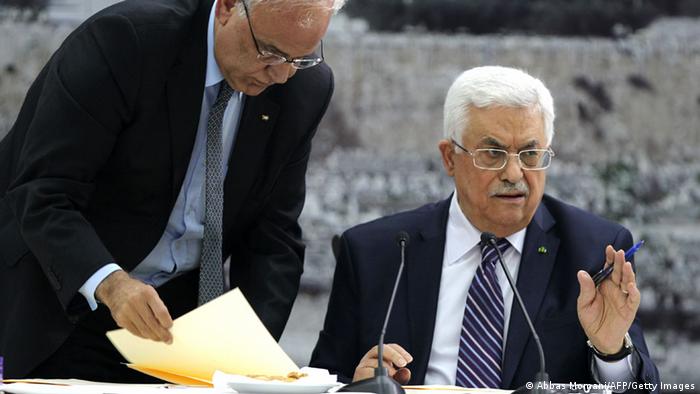 It's another factor pushing the two sides further apart: Israel wants to restrict the transfer of taxes and duties to the Palestinians, Israeli media report, citing an Israeli government official. According to that information, the finances are to be held back to pay Palestinians' outstanding dues, for example with the Israeli electricity company. Saeb Erekat, Palestinian negotiator in the peace talks, has called these measures "theft," according to the Israeli news portal "Ynetnews."

Even before that, Israeli Prime Minister Benjamin Netanyahu hadforbidden his cabinet members to contact their Palestinian counterparts in Ramallah. The only exceptions are Justice Minister Tzipi Livni, who is also in charge of the peace talks with Palestine, and the officials who are crucial for the Israel-Palestine security cooperation. Granted, there is usually not much of an exchange between the authorities anyway. But this explicit muzzle is still considered an escalation in the peace talks, which seem to be in a rut. And Israeli media report that more sanctions might follow. 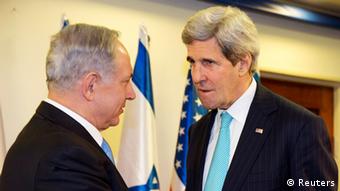 The Israeli government is reacting to the diplomatic advance by Palestine's President Mahmoud Abbas, who signed 15 international conventions last week (as seen in the article photo), including the Geneva Conventions. Originally, the Palestinians had promised not to take any "unilateral" steps with the UN during the nine months of the current peace talks. They are, however, accusing Israel of not sticking with the promise to release 26 Palestinian prisoners in March. Only when that became clear, the Palestinians say, did they decide to sign the conventions.

Penalties an established method to apply pressure for Israel

In 2012, Israel had held back taxes and duties it usually collects and forwards to the Palestinians once before. The reason back then: Palestine was recognized as an observer state by the UN; an act Israel had rejected.

People in Ramallah have learned to expect sanctions, Mohammed Shtajeh says. "We shouldn't let ourselves be blackmailed by economic measures," President Abbas' close confidant adds. Until recently, he was a negotiator in the Palestinian peace talks team. "Palestine's economy is in a rough place, and has been for a while. We're used to stumbling from one crisis into the next." Shtajeh still believes that neither Israel nor the US could have an interest in seeing the Palestinian Authority collapse completely.

He says Palestinians are counting on help from the EU and Arab states. The Arab League promised to support the Palestinian Authority with 100 Million Dollar a month in a meeting on Wednesday. At the same time, the League would also welcome the continuation of the Israeli-Palestinian talks, sources in Cairo say. 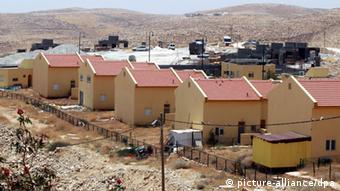 The relations are even tenser than before after the sanctions and mutual accusations. "I hope the sanctions will remain an empty threat, because putting them into action would hurt the chances of everyone getting back to the negotiating table," Shaul Shay, Israeli Middle East expert at the Interdisciplinary Center for Counterterrorism (IDC) in Israel, says. After all, Israel "has no interest in causing a financial crisis for the Palestinian Authority. The economy is already in shambles there and it's important for Israel that the cooperation remains intact."

Netanyahu's government is facing pressure on the domestic front as well. His coalition partner Naftali Bennett from the nationalistic party "The Jewish Home" has threatened to leave the coalition for days. Israel mustn't give in to demands to free Palestinian prisoners who have Israeli citizenship, Economy Minister Bennett says. Should the 26 convicts be released after all, it could topple the government coalition.

Palestinian and Israeli negotiation teams have met under the leadership of US special envoy Martin Indyk several times since the latest blows to the peace talks. But no clear results have come of it. US Secretary of State John Kerry mainly blames the Israelis for the current crisis, after they not only haven't released the prisoners, but also announced the construction of 700 new apartments in East-Jerusalem. Israel has rejected the US' accusations of being the main culprit.

The Obama administration is reassessing its mediating role in the Middle East peace process after seeing little progress. US Secretary of State John Kerry, who had brokered talks, has drawn criticism for his role. (08.04.2014)

Israel has failed to release the last group of Palestinian prisoners, and Palestinian President Abbas signed applications to join 15 United Nations conventions. It's unclear how the Middle East peace talks can continue. (04.04.2014)