Twenty years after Yitzhak Rabin was murdered, Israel is more divided than ever over the fading Mideast peace process. The young people who back then lit candles and sang songs for peace are now increasingly skeptical. 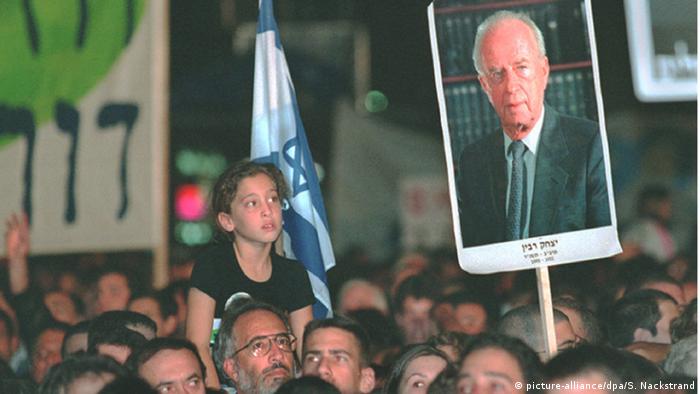 Not a single Israeli who owned a TV set back in 1995 could miss these chilling words by Channel 2's anchor Yaakov Eilon on the night of November 4.

"I have been working in this profession for many years, Yaakov," answered reporter Aharon Barnea from Ichilov Hospital in Tel Aviv, to which the mortally wounded prime minister was rushed before his death was determined. "But in my entire life I never thought that I would be the one telling you this," he continued, with tears stuck in his throat. "Yet this is what we are just being told."

People were seen in the background screaming, falling on the ground, crying, calling their loved ones, during the live coverage provided by Israel's most popular news channel. Barnea dropped an oversized cell phone and remained silent. Clearly, he was in complete shock, like the rest of the country.

"I remember my mom called me, telling me to come home straight away," says Yuval Cohen, a 34-year-old teacher from Tel Aviv. "I was staying at a friend's place, but we were playing, or eating, but anyway not watching TV," he recalls. 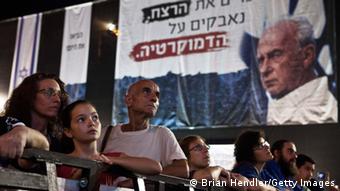 "We felt as if we had brought them into a country we could no longer endorse."

Many other young Israelis received similar phone calls from their parents. It was such a national trauma that parents felt they needed to tell their children about it in person: "Our prime minister was shot and killed by an Israeli, in the middle of a rally for peace."

"I felt so confused, ashamed, I didn't know what to say or what to think. I was crying all night and I didn't want my children to see," says Miriam, 61, Yuval's mother. "We felt as though we could not explain anything to them anymore. Even if they didn't notice it, we - the parents - felt as if we had brought them into a country that we could no longer endorse. What had we become? That was the general atmosphere."

On Saturday, former US President Bill Clinton was to address a rally in memory of Israel's assassinated premier as part of commemorations marking the 20th anniversary of Rabin's killing by Yigal Amir, who is still serving a life sentence.

Only last week, Amir's brother, Hagai, was arrested on suspicion of incitement against Israeli President Reuven Rivlin in a Facebook post. He was released from prison in 2012 after more than 16 years behind bars for conspiring with his brother to assassinate Rabin.

"Rivlin is a sycophantic politician," Hagai Amir wrote in the post. "He cannot decide whether or not my brother should be released, leaving it up to the Almighty to decide - as He decided that Rabin would drop dead despite Rivlin and his friends not really agreeing [...] it's time for Him to decide that Rivlin and the Zionist state must disappear from this world just as Sodom did because of the crimes they have 'lawfully' committed against their people - and that day is no longer far away."

Now, in the midst of yet another bloody round of unrest in Israel, many wonder whether peace will ever be possible. 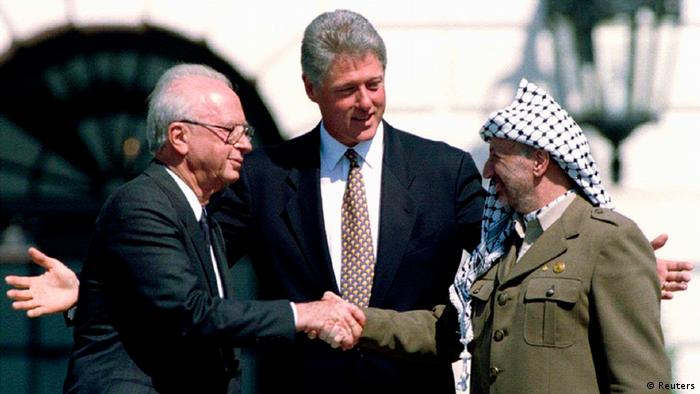 "I think this is one of the main differences between 1995 and today. Back then the situation was tough, and many resisted the Oslo Accords, but there was still hope. Today, there is just numbness, despair," Yuval says. "Everybody knows the political situation has to change, but people will rarely take to the streets for that. We are weary."

Initially, Rabin's assassination seemed to spark a desire for unity in the traumatized country, and his political heirs appeared poised to continue his path. Although Rabin himself was rarely precise on the matter, most people assumed this meant a Palestinian state alongside Israel.

But within six months of the shooting, Benjamin Netanyahu was elected as prime minister, to the horror of Rabin's supporters, who felt Netanyahu was among the major agitators against the slain premier and had even tacitly sanctioned propaganda that some claim endorsed and legitimized the murder.

Demonstrators had been holding signs depicting Rabin as a Nazi officer, with many calling explicitly for his death. Netanyahu has said he did not see the posters at such rallies.

But what was considered absolutely shocking two decades ago is slowly finding its way into the Israeli mainstream. Israeli artists and social critics say that the murder itself is still considered as traumatic and denounced as wrong, but that the reality wished for by the murderer is gaining legitimacy. 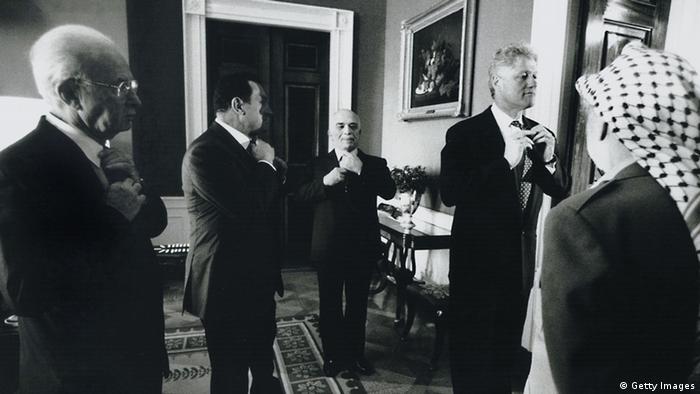 Many considered Rabin (l.), seen here with other leaders before the signing of the Oslo Accords, as a beacon of hope

"But Rabin's murder was a very 'successful' one. It has clearly reached its goals. It has created a discourse in which a political assassination is not only an option to be considered, but a pragmatic one. It works."

'The children of candles'

"A lot of my friends have changed since then," Yuval recalls. "Some emigrated, some have become more right-wing. And some, perhaps like myself, are gradually becoming more oblivious to reality."

And indeed, the "children of candles," as they were called by Israeli media 20 years ago, are facing a society in which "peace" is almost a swear word. The ones who used to light memorial candles at the site of the murder, where a monument was later erected, are pretty skeptical.

"I totally belonged to the candles generation," says Adi Lavi, a naturopath living in a small community in Israel's south. 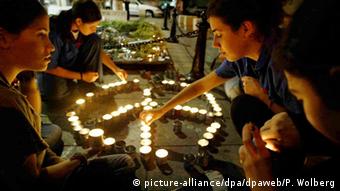 "But today I think I was very naive. I still believe in peace with our neighbors, I still condemn any kind of murder and I still want a better future - but I don't know who can lead us there anymore, and I'm not so sure Rabin would have been the one," she adds.

Analysts stress that Rabin had to contend with a very hostile environment, including a very strong opposition and a minority government. No one thus knows whether or not his death truly meant the death of the peace process in the Middle East.

"Things will never be the same again," Yuval says. "It doesn't matter if Rabin also took the last chance for peace with him to his grave or not. What matters is that people like you and me know clearly that whoever holds similar opinions is doomed to be shot at - and that is an agonizing diagnosis."