Former military chief Benny Gantz has been asked by President Reuven Rivlin to form a government. Gantz vowed to protect Israelis against the Coronavirus and the "virus of division, hatred and uncertainty." 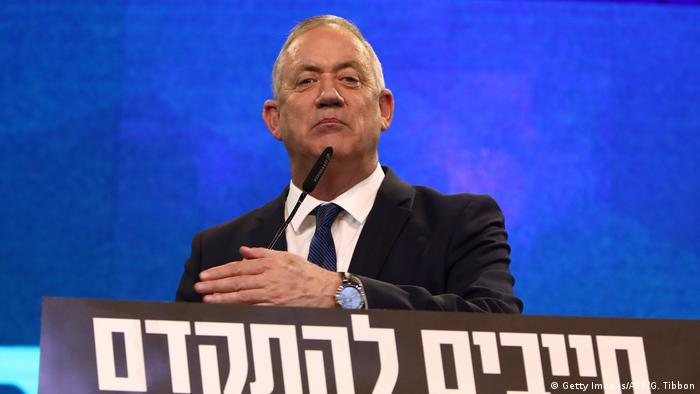 The leader of Israel's centrist Blue and White party and main rival of Prime Minister Benjamin Netanyahu, Benny Gantz, was officially tapped to form a government on Monday.

In a ceremony that was broadcast online without, due to the coronavirus pandemic, President Reuven Rivlin formally handed Gantz the task of breaking Israel's political deadlock.

The move comes after Israel carried out its third election in less than a year on March 2.

Although Netanyahu's Likud party came was the largest voted party, consultations with other parties on Sunday revealed that Likud was three seats short of the number required to form a parliamentary majority.

Gantz's Blue and White party, on the other hand, had the support of 61 seats, garnering him a slim majority.

"The keys," Rivlin told Gantz, "are in your hands."

The former military chief vowed to form a government that would protect Israelis against the Coronavirus and against the "virus of division, hatred and uncertainty."

"We must not have a fourth election," Gantz said.

"I'll do everything to form in as few days as possible a national, patriotic and broad government," Gantz added.

He called on rivals to "put aside personal interests" to allow the formation of a "functioning" government of national unity.

President Rivlin has made clear that a government must be established soon to help Israel beat back the COVID-19 pandemic, saying political leaders had a duty amid "the national and international emergency."

The new parliament, the Knesset, is set to be sworn in on Monday. Currently, a disjointed group of parties have come together to back Gantz. These include Avigdor Liberman's ultra-nationalist party, the secular Yisrael Beiteinu party and 15 lawmakers on the Arab Joint List.

To form a minority government without Netanyahu's Likud will be a tough task for Gantz, as two legislators from his Blue and White alliance have opposed a coalition that includes Arab parties.

Likud officials have so far only offered to form a coalition with Gantz if he allows Netanyahu to lead a 6-month emergency government first, to pass a budget and deal with the coronavirus crisis.

Gantz, however, has not signaled that he would be open to such an arrangement.