An "Ali Baba" themed playground in Berlin has caused some to see creeping Islamization. Others find the whole debate silly and filled with hate. 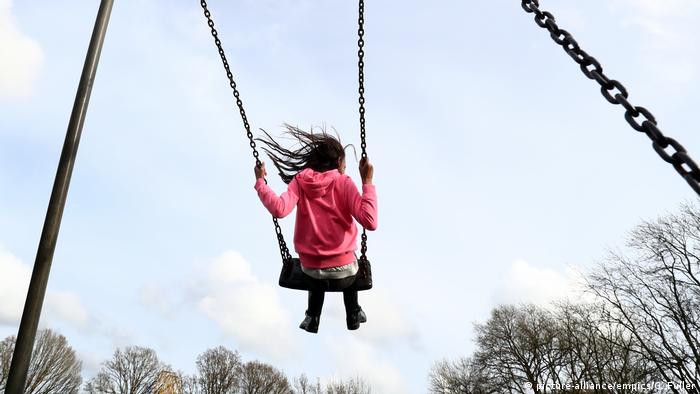 An "Ali Baba and the 40 Thieves" themed playground being built in Berlin's Neukölln district has unleashed a stir of controversy in recent days in Germany.

A wooden mosque, or palace, adorned with a half-crescent sits in the sand. Small blue minarets rise to the side. In the sand, there are wooden palm trees and camels.

It brings to mind visions of an imagined Orient made famous in children's books and films such as "Aladdin."

For some, it's just a playground where children can play in a fantasy world. For others, it's sign of encroaching Islamization in Germany.

"Playground with a mosque - Islamization is advancing!" wrote Carsten Ubbelohde, a politician in Berlin with the anti-immigrant Alternative for Germany (AfD).

"Neukölln: A playground with a mini-mosque. Indoctrination is already happening at the smallest age. Poor Germany. People are rightly upset," wrote another Twitter user.

For others, any debate on a playground is silly and a sign of hate against Muslims.

"I must have had a great childhood, when I first think of Aladdin when I see this playground. It's a pity that not everyone is like that," wrote Roman Francesco.

"If those in the AfD already get so excited about a playground in Neukölln, they'll have their heads bursting in two weeks - then the half-moon is in the sky over Berlin!" joked Stefan Heinrich, referring to the current full moon.

The playground won't be finished until the end of the year, but the mayor of Neukölln already finds the discussion surrounding the issue "absurd and far-fetched."

Franziska Giffey told the Berliner Morgenpost that other playgrounds in the district are based on themes from fairy tales, including "Captain Bluebear” and "Snow White and the Seven Dwarves.”

The decision to construct an "Ali Baba and the 40 Thieves" themed playground was made together with two local nurseries, including one that goes by the same name, she said.

Güldane Yilmaz, the Turkish-origin head of the multi-cultural "Ali Baba and his Thieves" nursery, is also shocked by the response from some.

"When I saw the dome, I felt happy like a kid. I would have never come across the idea to relate it to a mosque," she told the Berliner Morgenpost. "One shouldn't make politics out of toys."

For now, the children don't even seem to notice. They are just happy to have a new playground after the old one fell into disrepair.

Many locals in the area also don't get what all the fuss is about.

"The half-crescent doesn't bother me, it fits with the Aladdin theme," Mechthild Weinmann told T-online.

"The half-crescent fits. There are many people who live around here that have Muslim backgrounds," she said.

"On the one hand I find it nice that other cultures are also represented here. On the other hand, it provokes those who view the half-crescent as a sign of Islamization. Maybe somebody should have taken that into account," he told T-online.

A rising number of adolescent migrants in Germany are turning to sex work after aging out of youth welfare programs. The Left Party has called for increased funding into integration and social policies. (10.04.2017)

A Catholic relief organization has released a new report on the plight of refugees in Germany. The study, intended to push lawmakers into action, indicates that many newcomers to the country struggle to find employment. (27.09.2017)

WHO: Poorer nations to get first 40 million vaccines next month 0m ago

US to review Afghan peace deal with Taliban 9m ago