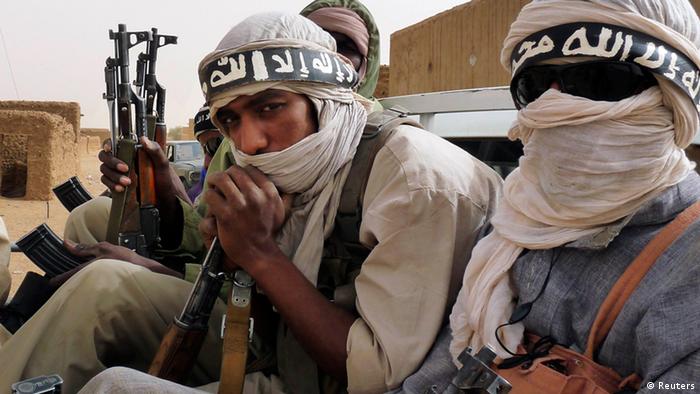 Ansar Dine on Tuesday called for "all the armed movements" in northern Mali to join in "an inclusive political dialogue" with the divided west African nation's central government in Bamako.

The Islamist group, which reportedly has ties to al Qaeda, also said that it rejects "all forms of extremism and terrorism." After meeting with Burkina Faso President Blaise Compaore on Tuesday, a diplomatic delegation representing Ansar Dine called for a "total halt to hostilities" in northern Mali.

The Islamists said in a declaration that they were committed to "the respect of fundamental rights and freedoms" and "the return of all displaced people and refugees." They also called for the implementation of a "full peace agreement that addresses all the deep causes of the crisis."

In March 2012, a group of Malian soldiers overthrew the government of then president Amadou Toumani Toure, accusing him of mishandling a separatist ethnic Taureg rebellion in the country's north.

Secular Taureg separatists exploited the ensuing political chaos to capture northern Mali and declare an independent state. But they were quickly sidelined by Islamist groups, such as Ansar Dine, who had also fought against the central government in Bamako.

Ansar Dine has implemented a radical form of Shariah law in the areas it controls. The group triggered international outrage when it began destroying cultural sites that it considers "un-Islamic" in the city of Timbuktu, a UNESCO World Heritage Site.

Although Ansar Dine has said it was ready for peace talks, international military experts have drafted plans to recapture northern Mali. The plans were submitted on Tuesday to the Economic Community West African States (ECOWAS), which now has to vote on the blueprint for military force.

The United Nations Security Council (UNSC) had given African leaders until November 26 to agree on a proposal for military intervention. Some 4,000 African troops are expected to participate in a potential military operation.

"We need to respond in detail to the Security Council on the logistics, timing, size and funding for the deployment of this mission," Desire Ouedraogo, president of the ECOWAS Commission, told the meeting of military planners.

"So your conclusions will be crucial in the next step, of getting the United Nations Security Council to adopt a new resolution authorizing deployment," Ouedraogo said.