UN officials have accused "Islamic State" extremists of using children as a "weapon of war" to deter families from fleeing violence. Iraqi-led forces have surrounded the militant group in its last bastion in Mosul. 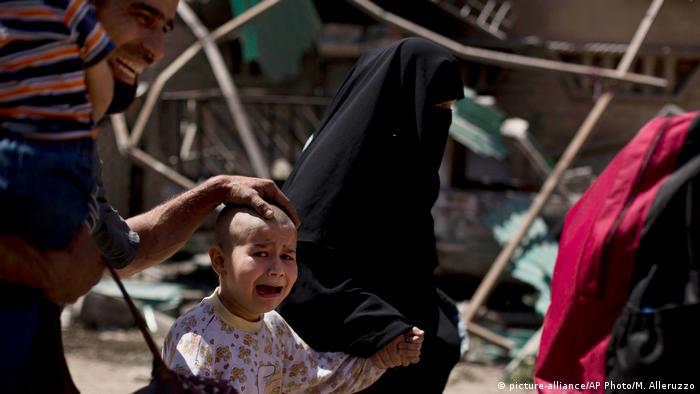 The UN Children's Fund on Thursday decried the targeted killing of children by the self-styled "Islamic State" (IS) militant group as a means to punish families trapped in Mosul.

"They are using children as a weapon of war to prevent people from fleeing," said Peter Hawkins, UNICEF's Iraq representative. "This just highlights how indiscriminate and catastrophic this war is."

IS rose to notoriety in 2014 when it captured large swathes of territory in Syria and Iraq, culminating in the occupation of Mosul, Iraq's second-largest city. In October, Iraqi-led forces launched a major operation to recapture the city.

Backed by a US-led coalition, Iraqi forces have managed to retake most of the city, except for the Old City center, considered the last district under the militant group's control.

Millions of children in need of humanitarian aid

Humanitarian organizations have warned that more than 100,000 civilians - roughly half of them children - may be trapped inside the city and purposefully placed in extremely dangerous conditions.

At least 1,075 children have been killed and 1,130 injured since IS captured territory in Iraq in 2014, UNICEF said. It noted that more than 5 million children are in urgent need of humanitarian aid.

"Across Iraq, children continue to witness sheer horror and unimaginable violence," UNICEF said in a statement. "They have been killed, injured, abducted and forced to shoot and kill in one of the most brutal wars in recent history."