The "Islamic State" went on a killing spree for weeks in a town in Syria's central Homs province ahead of its retreat, according to a Syrian official. The killings raise fears of more revenge attacks as IS loses ground. 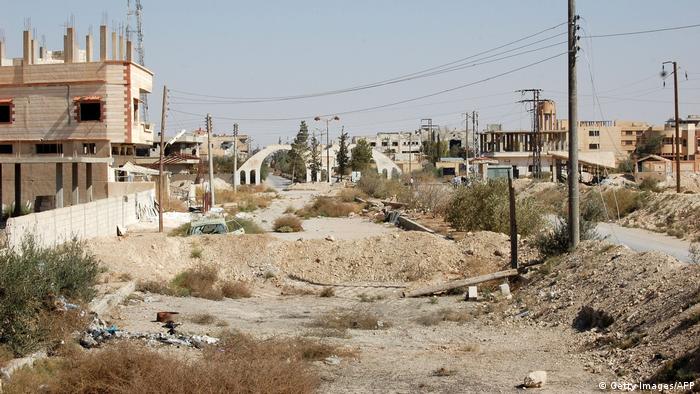 Bodies of more than 60 Syrian civilians have been found in the central Syrian town of al-Qaryatayn, a senior Syrian official and activists said on Monday. The town was retaken from "Islamic State" militants by the Syrian army over the weekend.

"More than 60 were dead, while more than 100 others are missing, either kidnapped or killed," Homs province governor Talal Barazi confirmed in interviews with Reuters and the Associated Press news agencies.

Barazi said most of the victims had been government employees or members of Syria's ruling Baath party.

"It is a shocking massacre," he said, adding that the killings went on for the three weeks that IS held al-Qaryatayn.

Some of them were shot on the streets as the militants retreated. At least 35 bodies were found shot and dumped into a deep shaft.

The Britain-based Syrian Observatory for Human Rights also reported the discovery on Monday. According to its sources, at least 128 people had been murdered, 83 of them within 48 hours, before the town was recaptured by Syrian government forces. The head of the Observatory, Rami Abdurrahman, also called the killings a "massacre."

The Observatory said around 200 militants had been in the town and withdrew towards the desert areas in the eastern part of Homs province. The region neighbors the province of Deir el-Zour, where the government and US-backed forces are mounting an assault on some of the last IS strongholds in the country.

The jihadis have lost most of the territory they had managed to capture in 2014. They have been retreating across northern and eastern Syria, days after losing control of in Raqqa, once considered the de facto capital of the self-proclaimed caliphate.

Al-Qaryatayn, which lies nearly 300 km (190 miles) west of Deir el-Zour, was first captured by the IS in August 2015. They used the strategically-important town to defend the historic city of Palmyra.

They lost control of the town to Russia-backed Syrian troops in less than a year only to recapture it again earlier this month.

The so-called "Islamic State" has been repeatedly accused of committing atrocities in Iraq. The UN is now ready to make sure evidence of potential war crimes will be preserved. (21.09.2017)

Masoud Aqil was an "Islamic State" prisoner in Syria. After fleeing to Germany, the Kurdish journalist realized that IS terrorists were also in Europe, and he began to track them. Frank Hofmann has this exclusive for DW. (11.08.2017)

Russia has accused the US of "barbaric" bombardment of Raqqa, after US-backed forces took control of the city earlier this week. Forces on both sides are racing to reclaim land in Syria's oil-rich Deir el-Zour province. (23.10.2017)