The 'Islamic State' (IS) terror group has claimed responsibility for attacks on the South Korean and Moroccan embassies in Libya. The offenses came within hours of each other as the US and Europe demanded a ceasefire. 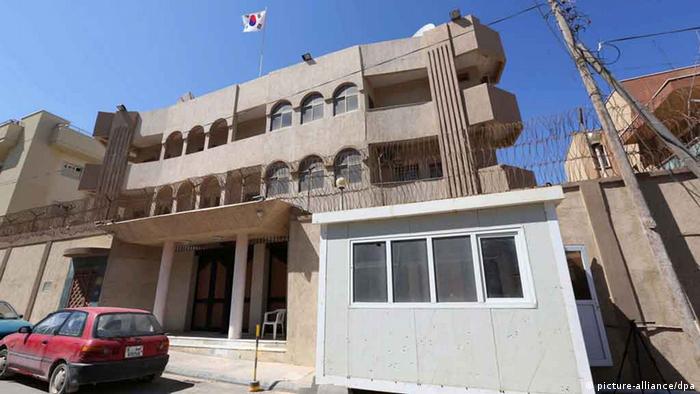 In the early hours of Monday morning, a bomb exploded at the gates of the Moroccan embassy in the Libyan capital, Tripoli. Several nearby cars were damaged, but no casualties were reported after the blast.

"A bomb inside a bag went off near the gate of the Moroccan embassy in Bin Ashour area, a security official said.

Morocco is currently hosting UN-backed discussions between representatives from the two rival governments who are currently controlling Libya - the internationally recognized government which has fled to Libya's Far East and the Islamist-backed Libya Dawn. Separate talks were also set to resume on Monday in Algeria.

Hours earlier on Sunday, gunmen opened fire on South Korea's embassy (pictured above). Two local security guards were killed and a third wounded in the drive-by shooting. The three South Koreans working in the compound escaped unharmed, however.

Both attacks were later claimed by 'Islamic State' (IS) on the micro-blogging site, Twitter. The jihadist terrorist group has previously claimed responsibility for a number of high-profile attacks on foreign targets in Libya, including the beheading of 21 Egyptian Coptic Christians and the abduction of nine foreign workers on the Al-Ghani oil field last month.

Since the overthrowing of Moamer Kadhafi in 2001, IS has taken advantage of the ensuing chaos, which has enabled the group to establish branches in all three of Libya's historic regions.

At Monday's talks in Algiers, the US and Europe's leading powers urged Libya's two rival governments to set an "unconditional" ceasefire and "finalize agreements on the formation of a national government."

"Only through compromise can Libya move toward a more secure, stable and prosperous future," said a statement issued by foreign ministers from Germany, France, Italy, Spain, Britain and the US.