The "Islamic State" militant group has claimed responsibility for the shooting of an Egyptian police colonel and a conscript. Meanwhile, an attack on a Red Sea Hotel was dismissed as the work of "drugged" individuals. 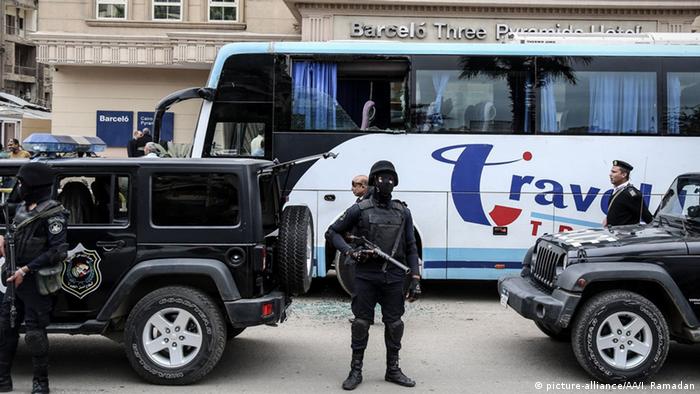 Arab Israeli tourists staying at a hotel were targeted in Giza, a day before the officers were killed

"Islamic State" (IS) claimed responsibility for the attack on police in a statement on Saturday.

The colonel, a traffic police district commander, and a conscript, who was driving, died when their car came under fire by unknown assailants on Friday.

Two police were killed in the shooting, when assailants opened the car carrying them in the Cairo suburb of Giza. However, IS claimed it had killed more than two policemen, having opened fire on three vehicles.

Moving and fixed checkpoints were deployed in the area in an effort to trap the attackers, but no suspects were immediately apprehended.

Egypt has been battling an IS insurgency concentrated in the northern part of the Sinai Peninsula since the 2011 overthrow of President Hosni Mubarak.

The violence has spilled over to the Egyptian mainland since elected President Mohammed Morsi was toppled by the army in 2013, with attacks coming increasingly closer to the capital.

Two Austrians and a Swede were stabbed in an attack on a hotel in the Red Sea resort of Hurghada on Saturday. The victims were only lightly wounded and were said to be in stable condition hours after the incident.

Security forces opened fire on the assailants, killing one and injuring the other, who was subsequently arrested. Officials played down the incident, describing the pair as being under the influence of drugs.

The Interior Ministry said the two men, armed with knives, had entered the restaurant at the front of the Bella Vista seaside hotel, after having arrived by sea. The attackers were also said to have been carrying pellet guns.

The ministry identified the dead attacker as 21-year-old Mohammed Hassan Mohammed Mahfouz, a student from Giza.

It was the second hotel attack in two days, with a group of more than a dozen youths having attacked a security post at a hotel near the Giza pyramids on Thursday.

IS claimed it was behind the incident and that it was targeting Israeli Jews staying at the hotel. The assailants aimed fireworks and birdshot at the checkpoint, but no one was hurt. Security sources said the guests at the hotel were Israeli Arabs.

Tourism has already been hit since the apparent downing of a Russian passenger plane over Sinai, an incident claimed by IS. Major tourist operators have since suspended packages to Sharm el-Sheikh and Hurghada.