German OSCE special envoy Wolfgang Ischinger has said Europe's security body might have to withdraw its monitors from eastern Ukraine, "if there's cause to fear for their lives." Four monitors went missing on Tuesday. 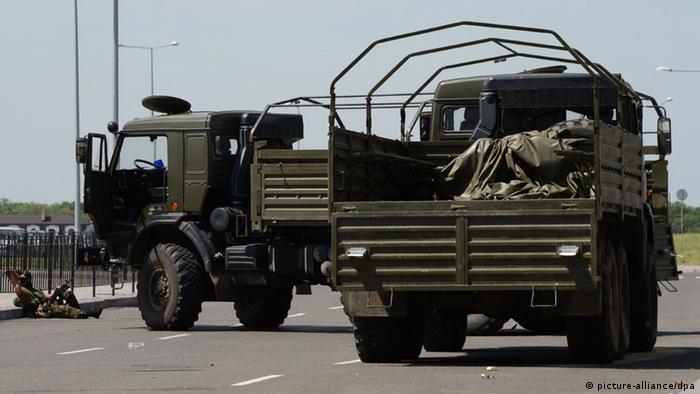 Veteran German diplomat Wolfgang Ischinger on Wednesday said the Organization for Security and Cooperation in Europe (OSCE) would consider withdrawing personnel from eastern Ukraine, unless the security situation improved.

"We do not know precisely where they are. On the basis of all we can infer, they are likely in the hands of one of the separatist groups," Ischinger told the German public broadcaster ZDF, after the Danish government on Tuesday said they were abducted by pro-Russian separatists.

"If the security situation is such that one must fear for the lives of our employees, then I fear that we really would have to withdraw," Ischinger said. Another group of seven OSCE military observers was held hostage for more than a week, before being released on May 3.

Ischinger has also acted as an OSCE mediator at Ukraine's national unity talks, which have so far not included the separatist fighters.

The diplomat said he hoped that Ukraine's presidential election winner, Petro Poroshenko, would be invited to the D-Day ceremonies in Normandy on June 6, 70 years after the Allied landings in northern France considered a key turning point in the latter stages of World War II.

"We should invite Poroshenko to Normandy, he should have a place there, not just Putin by himself. They should speak to each other there, it's definitely a good opportunity," Ischinger said.

French President Francois Hollande had said on the sidelines of the difficult EU leaders' summit in Brussels on Tuesday night that he would invite Putin to the ceremony for "face-to-face" talks, mainly on Ukraine.

Hollande said he was confident Putin would "now recognize" Poroshenko.

Moscow has previously not recognized the unelected interim authorities in Kyiv installed after unrest and the ouster of former president Viktor Yanukovych.

New Ukraine President Poroshenko, who won an absolute majority in Sunday's Ukrainian election, told the German mass-circulation daily Bild on Wednesday that military efforts against separatist fighters in the east would continue.

"We are in a war situation in the east, the Crimea was occupied by Russia, and there is great instability. We must react," Poroshenko told Bild.

"We will no longer permit these terrorists to kidnap and kill people, to occupy buildings and to nullify laws. We will end these shocks, a real war is being waged here against our country," he said.

Poroshenko said that his goal was to arrest separatist fighters and try them in courts, but he cautioned that soldiers should also be able to fight back when attacked.

"For me as president, the army now has the highest priority, we must urgently provide more financial resources to our soldiers in times of war," he said.

Donetsk is one of the separatist strongholds. The rebel fighters reported at least 40 casualties on Tuesday after a battle for control of the city's airport. Government forces reclaimed control of the airport after separatists seized it on Monday; Interior Minister Arsen Avakov said on his Facebook page that Ukraine's military suffered no casualties.