Is the EU doing enough to protect journalists? | Europe | News and current affairs from around the continent | DW | 16.10.2021

Is the EU doing enough to protect journalists? 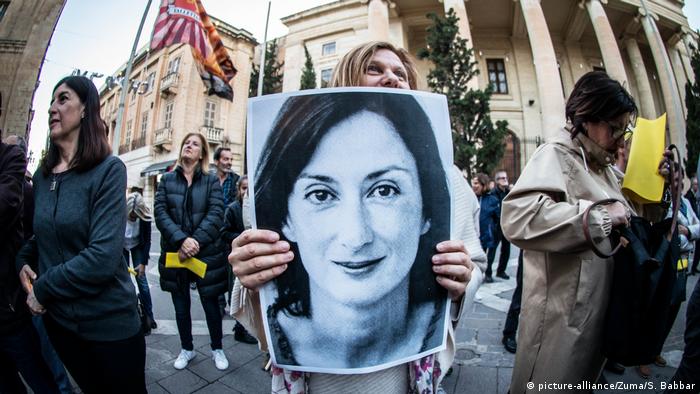 When Daphne Caruana Galizia was murdered on October 16, 2017, in a car bomb attack, people were shocked around the world.

But the Maltese reporter, who was renowned for her investigations into corruption and money laundering, wasn't the only journalist who would be targeted. In the four years since her death, other colleagues including Jan Kuciak from Slovakia, Giorgos Karaivaz from Greece and Peter de Vries from the Netherlands have also been killed. In Europe — the continent that is considered a relatively safe haven for media professionals.

Julie Majerczak, head of the Brussels office of Reporters Without Borders (RSF), told DW that even though that's still the case, the situation has been steadily deteriorating in the last couple of years. "And journalists being murdered is only the tip of the iceberg," she said.

According to the European Commission, 900 media professionals were attacked in the European Union in 2020. Some of these attacks were physical, but they also included insults and harassment — especially of women, both offline and online.

These findings don't come as a surprise to Manuel Delia. The Maltese investigative blogger and activist who led anti-government protests following Caruana Galizia's murder recently decided to leave his home country with his family for an undisclosed location.

He was being targeted with threats by those accused of complicity in Caruana Galizia's murder; he received countless anonymous phone calls, and fake websites were set up in his name to ruin his reputation.

The murder of Caruana Galizia has had a "paradoxical effect" on journalism in Malta, he told DW. The fact that most of the suspects have been charged and their crimes exposed was a sign that it does not work out well for those who killed journalists. "That makes us feel safer," he said. 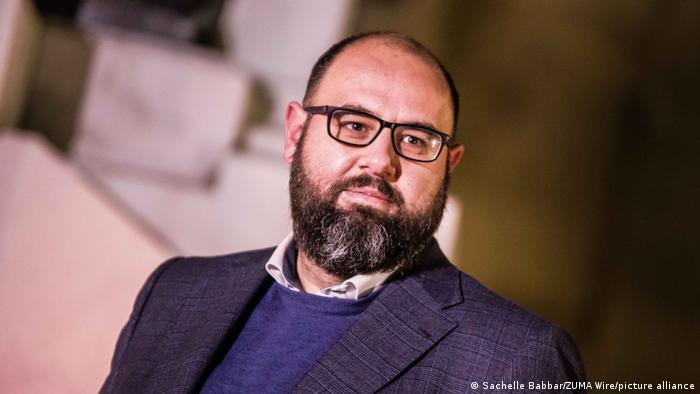 But at the same time, Delia said, he and other journalists have been depicted as traitors and threats to Malta's democracy in media outlets owned by the governing Labour Party. And this "isolation," as Delia terms it, has given criminals the opportunity to put further pressure on them via blogs or spoof websites or emails.

"These days are probably the hottest times in the last four years," said Delia. "Will this end up in physical violence? It has once, so I cannot make any promises."

Polish investigative journalist Wojciech Ciesla has also noticed the pressure mounting on those journalists who report critically on his country's ruling right-wing Law and Justice party (PiS). Ciesla, who works with Investigate Europe, a multinational research team, said things have dramatically changed since PiS came to power in 2015.

"I think Poland is currently following Viktor Orban's steps in Hungary toward limiting the freedom of the press," he said, referencing the Hungarian prime minister's systematic efforts to seize control of the country's media, control political narratives and dismantle pluralism. Every day is a struggle to access information, Ciesla added, with the government deciding who has "the privilege" to be informed.

EU pledges to 'protect those who create transparency'

The experiences of reporters like Delia and Ciesla have not gone unnoticed in Brussels. The European Commission, the EU's executive body, has recently promised to take more action.

EU Commission head Ursula von der Leyen dedicated an entire part of her State of the European Union speech in September to the freedom of the press. "Information is a public good," she said. "We must protect those who create transparency — the journalists."

That same day, the commissioner responsible for upholding the rule of law in the EU, Vera Jourova, presented a package of recommendations to help EU countries follow through with that vow. She stressed that it was the first time media freedom and safety had been placed so high on the European agenda.

Delia said it was good to see that EU institutions "have stepped up the alarm" and shone the spotlight on how important journalism is for democracy.

The Maltese blogger has is hopeful about the legislative proposals that EU officials have pledged to present in 2022. Among them is the European Media Freedom Act, which aims to protect the independence of media. It's not yet clear what measures this package will contain, but Majerczak of RSF said it would probably tackle hidden state aid for pro-government media, for example through advertisements. 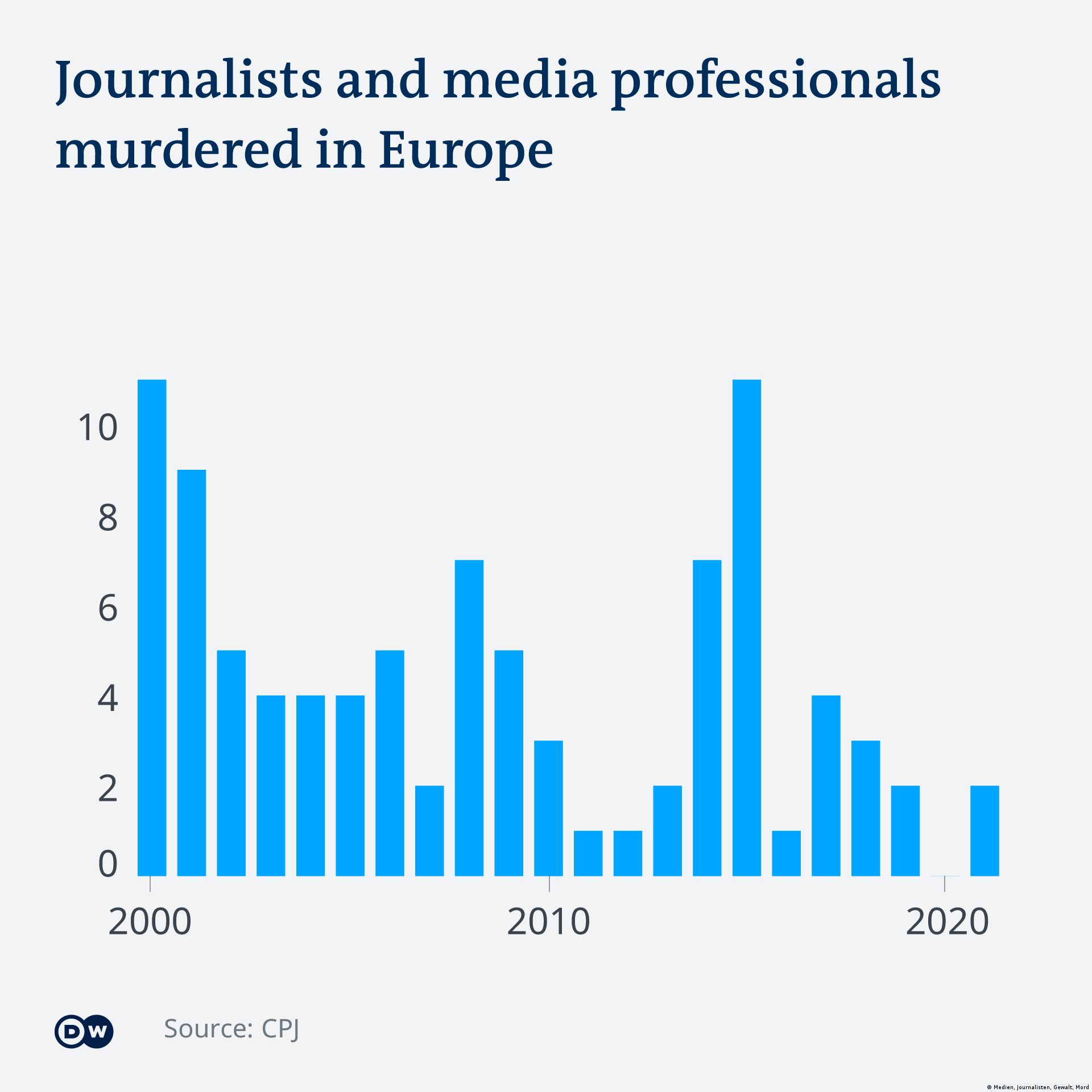 "What we absolutely need are legislative measures that are followed by sanctions if breached, not only recommendations," said Majerczak. She fears — as do journalists Delia and Ciesla — that stern words aren't enough to make an impression on some EU governments.

"I'm thinking of Poland, Hungary, Malta, Greece and Bulgaria for example," she said, singling out Bulgaria as "the worst EU student."

In RSF's 2021 World Press Freedom Index, the eastern European state ranked 112 out of 180 countries. According to RSF, the few outspoken journalists in Bulgaria are subjected not only to harassment by the state, but also intimidation and violence.

Delia has also pinned his hopes on another initiative the EU Commission is planning to put forward next year which aims to protect journalists and human rights activists against abusive litigation, or so-called strategic lawsuits against public participation (SLAPP).

When Daphne Caruana Galizia was murdered in October 2017, the investigative journalist had 47 SLAPPs pending against her. These intimidation lawsuits are often used to threaten and silence media workers — a huge problem, especially for those who work independently or for small research entities.

"The person charged with killing Daphne wanted to sue me in the UK for over 70 million pounds [€82 million or $95 million]," said Delia. "That would have been my last day in journalism."

"I have little reason to be optimistic. My country is less democratic than it used to be," he said.

But at least, he added, EU institution initiatives are going in the right direction.

The right-wing government of Prime Minister Janez Jansa has cut funding for Slovenia's public press agency, claiming the service hasn't accounted for its spending. Rights groups have decried the threat to press freedom.

Press freedom under pressure in the EU