'IS' leaves last pocket of Damascus

For the first time in seven years, all of wider Damascus is now under government control. Islamists have abandoned the city of al-Hajar al-Aswad, south of the capital. 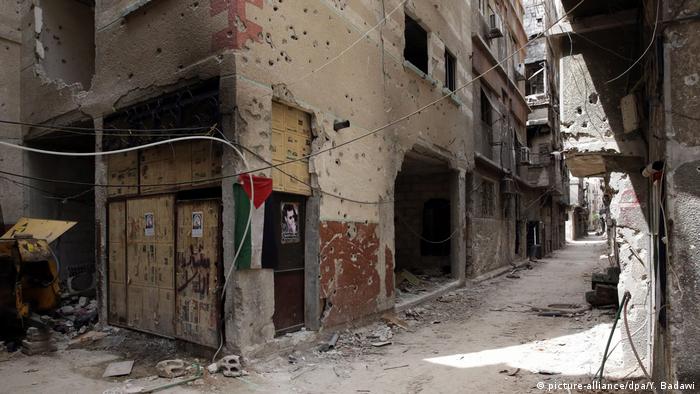 "Islamic State" (IS) militants left their last pocket of power outside Damascus on Monday, as jubilant government forces fired rounds into the air in al-Hajar al-Aswad. This means that the regime of Syrian President Bashar Assad has regained control of all territories in and around the capital.

Before the Syrian Civil War broke out in 2011, the city of al-Hajar al-Aswad was mostly known as the site of the Yarmouk camp, home to more than 100,000 mostly Palestinian refugees.

First opened in 1957, over the decades Yarmouk grew into a sprawling town with narrow streets and tightly packed blockhouses. In 2012, the camp became the scene of intense fighting between anti-Assad rebels, government troops, and local militias.

In 2015, its population now reduced to under 20,000, the camp was taken over by IS. By the time a humanitarian ceasefire was called in al-Hajar al-Aswad on Sunday to allow women and children to escape the area, less than 8,000 residents were left in the camp.

Vow to 'retake every inch'

According to the Syrian Observatory for Human Rights, the operations to clear out the city killed 250 members of pro-government forces, 233 jihadists, and more than 60 civilians.

Assad has said he intends to retake every inch of pre-war territory, but that could prove difficult considering the tangled operations and alliances of various militias, Kurdish forces and western powers such as the US and Turkey in Syria's border regions.

"The Daesh terrorist organization was wiped out in Hajar al-Aswad," a soldier told state television, using an Arabic acronym to refer to IS. "We will keep marching until we liberate all parts of Syria."

The small country of Lebanon has been home to Palestinian refugees since 1948. In recent years, it's also become a haven for people fleeing war in Syria and resources are now becoming scarce. DW's Diana Hodali reports. (14.05.2018)

The Organization for the Prevention of Chemical Weapons has said samples show a high probability that chlorine gas was used in an attack in Syria. It did not say who had used the banned weapons. (16.05.2018)

Russian President Putin said the Syrian military's successes have created conditions for "the start of a political process on a major scale." Syria's Assad said progress would be made in the Astana peace talks. (18.05.2018)