Genome analysis of four ancient humans has shown there was mass migration into Ireland from the Middle East. The findings could explain the origins of Irish culture and language. 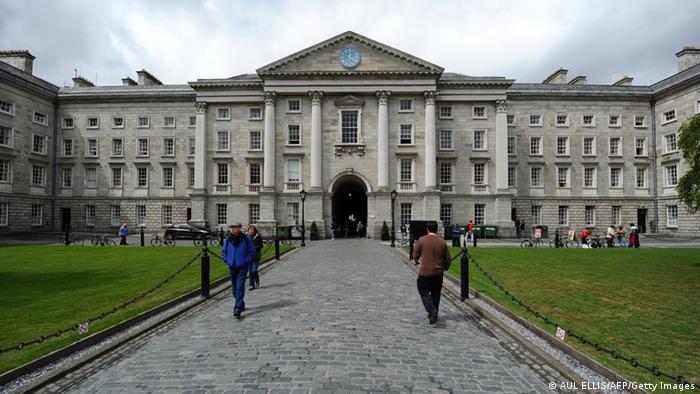 Some of the researchers worked at Trinity College Dublin, Ireland

A team of geneticists and archaeologists have found that Ireland experienced a massive prehistoric wave of migration from the Middle East and Eastern Europe, after sequencing genomes from ancient Irish humans. The findings were published in a study in the Proceedings of the National Academy of Science (PNAS).

The team sequenced genomes from an early woman farmer, who lived near what is now Belfast about 5,200 years ago, and three Bronze Age men from about 4,000 years ago.

Dan Bradley, lead researcher and a genetics professor from Trinity College Dublin, said the results suggested that the woman farmer "has about 60 percent Middle Eastern origins." Modern farming is thought to have begun in the Middle East over 10,000 years ago.

"This is a rough estimate but we are certainly comfortable stating that she has majority Middle Eastern ancestry," said Bradley.

The three Bronze Age men, who were found on Rathlin Island off Northern Ireland, have nearly a 30 percent genetic makeup "from the peoples originating above the Black Sea," Bradley said.

According to the researchers, the woman farmer had black hair, brown eyes and resembled southern Europeans.

The three men were found to have excessive iron retention, which is often found in people of Irish descent and commonly referred to as a Celtic disease.

"Genetic affinity is strongest between Bronze Age genomes and modern Irish, Scottish and Welsh, suggesting establishment of central attributes of the insular Celtic genome 4,000 years ago," said Lara Cassidy, professor at Trinity College and another author of the report.

According to Bradley, the findings point to a strong possibility that the ancestral Celtic languages of Ireland, Scotland and Wales were introduced by the massive prehistoric migration wave.

"Our discovery of a major migration to Ireland in the Bronze Age does at least identify this horizon as a candidate," he said.