Ireland and the Czech Republic vote in European elections

European Parliament elections have entered their second day, with Irish and Czech voters going to the polls. This comes as Eurosceptics in the Netherlands appeared to suffer a setback on the first day of voting. 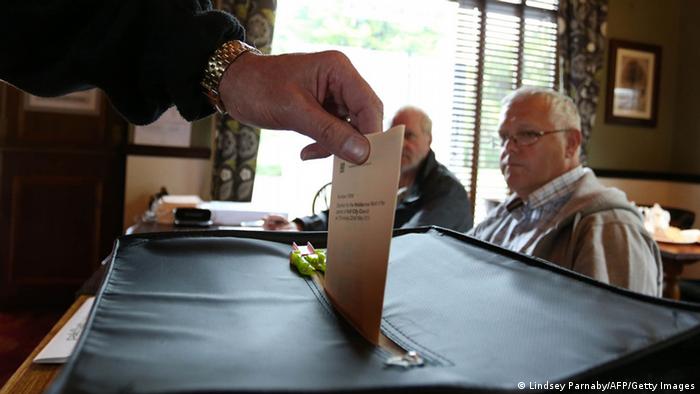 Irish and Czech voters will be going to the polls on Friday to choose their next members of the European Parliament on the second of four days of polling across the 28-nation European Union.

Polls in Ireland, where just over 3 million people can participate in the vote, opened at 7 a.m. (0600 UTC). Turnout on the island could be boosted by local elections, which are taking place at the same time.

Two days of voting in the Czech Republic get under way at 2 p.m. (1200 UTC). The Czech protest party Ano, led by billionaire Andrej Babis, is expected to win most of the 21 seats up for grabs in the country, with its government coalition partner, the Social Democratic party (CSSD), likely to come second.

No official results from the elections will be released until late on Sunday after polls have closed in all 28 EU member states.

However, an exit poll from the opening day of elections in the Netherlands on Thursday indicated that the party of anti-Islam populist Geert Wilders appeared to have lost support.

An IPSOS exit poll published by Dutch state broadcaster NOS said Wilders' Party for Freedom had won just 12.2 percent of the vote, down from 17 percent at the last election in 2009.

The result would seem to go in the face of predictions that far-right and far-left parties might make considerable gains on the continent as Europe struggles to recover from an economic crisis.

Britain also voted on Thursday, but no exit polls have been released.

Latvia, Malta and Slovakia are to vote on Saturday, and the rest of the countries in the bloc on Sunday. Altogether 388 million Europeans are entitled to vote for 751 deputies in the European Parliament.

US state capitals brace for pro-Trump demonstrations 0m ago

Tunisia: Youths clash with police over economic woes 27m ago