Iraqi President Jalal Talabani is in hospital after suffering a stroke. The 79-year-old Kurd, who took up the presidency in 2005, has suffered poor health in recent years. 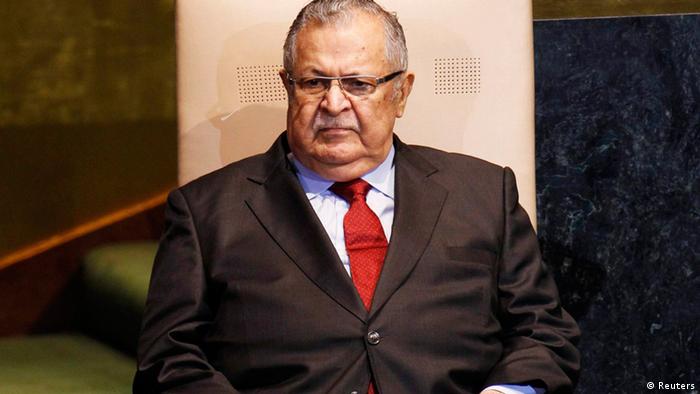 Jalal Talabani was in hospital on Tuesday, reportedly still unconscious after suffering a stroke.

"Due to fatigue and tiredness, [Talabani] had a health emergency and was transported … to the hospital in Baghdad," a statement on the president's official website said. The same site later said that "bodily functions are normal and the health of his Excellency the president is stable."

State television reported that Talabani was suffering from the after-effects of a stroke. Iraqi officials told several sources that the president was in a stable condition, and that Prime Minister Nuri al-Maliki had visited him in hospital.

The 79-year-old Kurdish politician was admitted to hospital in Baghdad on Monday evening.

He has suffered poor health in recent years, traveling to the US for heart surgery in 2008 and being treated for dehydration and fatigue in Jordan in 2007.

Talabani became Iraq's first Kurdish president in 2005. He was a long-standing member of the Kurdish resistance movement within Iraq, with his Patriotic Union of Kurdistan (PUK) group an ally of invading US-led forces in 2003.

Under the terms of the Iraqi constitution, the country's president should be a Kurd, the prime minister a Shiite Muslim and the parliamentary speaker a Sunni Muslim.

Talabani has won praise since taking office for working to bridge ethnic divisions in the country.