Some 150 Iraqi peshmerga fighters have crossed from Turkey into the Syrian border town of Kobani to help defend it against jihadist militants. They were backed by US-led airstrikes. 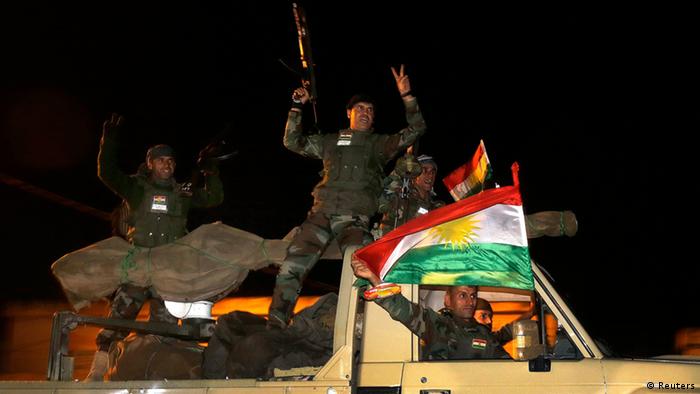 Kurdish peshmerga forces from Iraq have crossed the Syrian border from Turkey to help fellow Kurds defend the border town of Kobani against "Islamic State" (IS) jihadist fighters who have been trying to take it for weeks.

A convoy of 10 vehicles carrying the peshmerga entered throught the western sector of the town late on Friday, the Britain-based monitoring group Syrian Observatory for Human Rights said.

Three airstrikes were carried out on IS targets by a US-led coalition while the fighters entered the town, according to the Observatory.

The IS insurgents have been trying to capture Kobani since mid-September. On October 22, the parliament in Iraq's autonomous region of Kurdistan authorized the deployment of peshmerga forces to the strategic town to help in its defense.

The IS militants currently control some 60 percent of the town.

The jihadist group has taken over considerable swathes of territory in both Iraq and Syria, prompting a US-led aerial campaign in both countries.

Turkey recently decided to allow the Iraqi Kurdish fighters to cross into Kobani from its territory after coming under pressure from the United States.

Ankara has shown reluctance to assist efforts to defend Kobani, saying that the Kurdish forces in charge of the town could have links with the Kurdistan Workers' Party (PKK), a group that has been waging a 30-year insurgency for self-rule in Turkey and has been declared a terrorist organization by the US and NATO.

In comments made after meeting French President Francois Hollande in Paris on Friday, Turkish President Recep Tayyip Erdogan complained that the West had been focusing too much on Kobani, known in Arabic as Ayn al-Arab.

"Why are coalition forces continually bombing this town of Kobani?" he said.

"We talk about nothing other than Kobani, which is on the Turkish border and where there is no one left any more except 2,000 people fighting," he added.

'Ankara's priorities are very different to US, EU'

"Islamic State" militants have besieged the Syrian border city of Kobani. Günter Seufert, an expert on Turkish affairs, spoke with DW about Kobani's significance, particularly for the Kurds. (08.10.2014)