The "Islamic State" miliant group has "shot and killed" civilians fleeing Fallujah, said the Norwegian Refugee Council. Around 50,000 civilians are trapped in the city center, according to Iraqi officials. 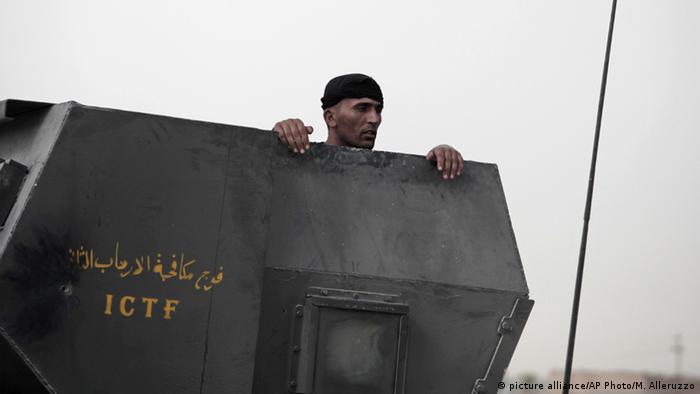 Iraqi forces on Sunday discovered a mass grave containing the remains of approximately 400 people near the city of Fallujah, where government troops launched an offensive against the "Islamic State" (IS) militant group.

As Iraqi troops move 60 kilometers west of Baghdad to wrest control of Fallujah from Islamic State, it is clear that people still living there are in dire straits, says UNHCR Chief for Iraq Bruno Geddo.

A major offensive has been launched to isolate the "Islamic State" group in northern Syria. Meanwhile, forces loyal to Libya's unity government are pushing back the militant group near their stronghold of Sirte. (02.06.2016)

"The security forces of the federal police, the army and the Hashed al-Shaabi (militia) found a mass grave in the Shuhada neighborhood during a mine clearing operation," a police colonel in the Anbar province, where Fallujah is located, told Reuters news agency.

"The mass grave contains about 400 bodies of members of the (Iraqi) military. There are also some civilians," the colonel said, on condition of anonymity.

Rajeh Barakat, a member of the Anbar provincial council, also confirmed the discovery, saying the civilians were executed by the militant group "on various charges, such as spying or breaking the organization's rules."

Iraqi forces launched an offensive to retake Fallujah in late May, which lies around 50 kilometers (31 miles) west of the nation's capital Baghdad. The dense city gained notoriety in 2004 when US soldiers suffered some of their worst losses.

Since then, IS has gained control of Fallujah, becoming one of the militant group's emblematic bastions.

Iraqi officials said the offensive slowed down due to the number of civilians trapped in IS-controlled areas.

Out of the 18,000 people who have reached displacement camps south of the city, only a few of them lived in Fallujah.

Many of those who arrived at the camp reported the militant group opening fire on them as they fled the city.

"An unidentified number of civilians have been shot and killed trying to cross the river," said a statement from the Norwegian Refugee Council (NRC).

"This is the worst that we feared would happen to innocent men, women and children, who have had to leave everything behind in order to save their lives," said Nasr Muflahi, the NRC's director for operations in Iraq.

Some 50,000 civilians are believed to be trapped in the city's center, where the militant group has amassed, officials said.