Iraqi forces have continued their drive into the heart of Ramadi, the 'Islamic State'-held city west of Baghdad. Some reports suggest they're close to retaking the city. 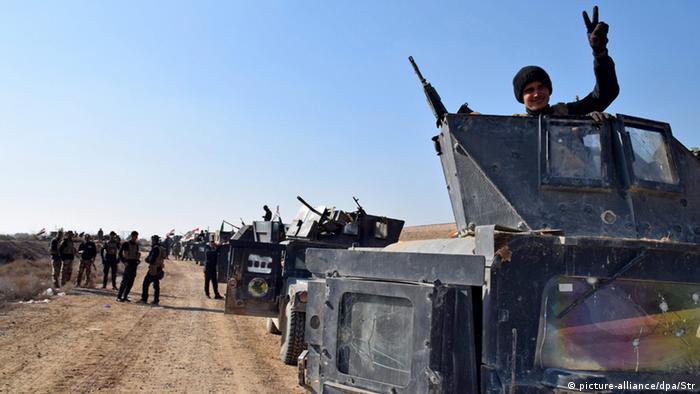 Iraqi soldiers pushed deeper into the terrorist-held city in the Euphrates River valley on Saturday, although some reports suggest their advance has been slowed somewhat by the so-called "Islamic State" (IS) militia.

Baghdad's forces made major progress on Tuesday, overpowering IS in the areas surrounding the city center. They have reportedly made it close to the former government compound in the Hoz neighborhood that is currently held by IS forces.

However, they have also encountered fierce fighting on the ground, with one police captain telling AFP news agency that at least two soldiers were killed.

Baghdad desperately wants to take back the capital of Anbar province from IS, which won the city after defeating Iraqi forces in May 2015. The taking of Ramadi was seen as a major victory for the terrorist group.

Iraq is supported in its efforts by airstrikes from a US-led international coalition. Baghdad's next goal is to retake the city of Mosul, which would effectively shatter IS's foothold in the country.

A victory in Mosul would also deprive IS of some of its oil revenues, which remain one of its biggest lifelines.

A purported audio message by the "Islamic State" (IS) leader Abu Bakr al-Baghdadi said air strikes by Russia had failed to weaken the group. The authenticity of the voice recording could not be immediately verified. (26.12.2015)

Damascus: Plan to evacuate militants from Yarmouk put on hold

A plan to evacuate thousands of militants and civilians from rebel-held districts of Syria's capital has been put on hold. It comes a day after an airstrike killed a Syrian rebel leader in the Damascus suburb of Ghouta. (26.12.2015)