Two suicide bombers have killed at least 32 people at a busy market in Iraq's capital city. More than 100 were injured. 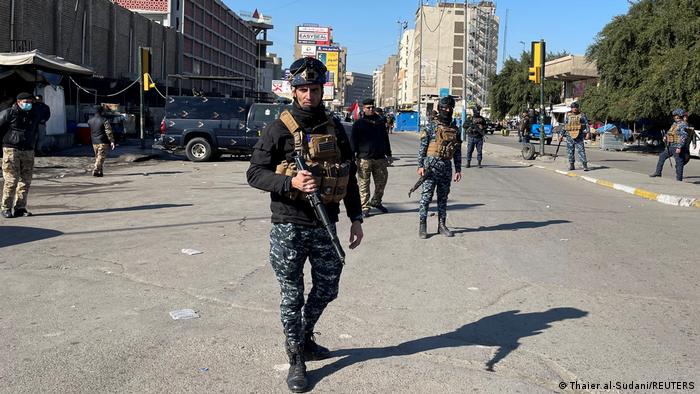 Two suicide blasts at a market in central Baghdad on Thursday killed at least 32 people, according to Iraq's health ministry.

The attack wounded an additional 110 people, the ministry said. Some were still in serious condition.

Attacks such as this in the Iraqi capital have been rare since the military defeat of the "Islamic State" in Iraq in 2017.

The first suicide bomber rushed into the market and claimed to feel sick so that people would gather around him. He then detonated an explosive belt, the Interior Ministry said in a statement.

A second attacker detonated his bomb as people gathered around the victims of the first attack, the ministry said.

Medics and security forces across the capital have been mobilized to respond to the deadly attack.

The militarized Green Zone area of the city was closed following the incident.

Who carried out the attacks?

The "Islamic State" group has claimed responsibility for the attack, and officials also pointed towards the militant organization.

"This is a terrorist act perpetrated by a sleeper cell of the Islamic State,'' said Tahsin al-Khafaji, spokesman for the Joint Operations Command, which incorporates an array of Iraqi forces. He added that IS "wanted to prove its existence" after suffering many blows in military operations to root out the militants.

The United Nations mission in Iraq condemned Thursday's attack as "a despicable act," saying that it won't hamper the country's push towards stability.

The United States, Egypt and Jordan also decried the attack, sending their condolences to the victims and their families.

Turkey said it was ready to support its "friend and neighbor Iraq in the fight against terrorism."

Baghdad market attack: 'All fingers are pointing to ISIS'

Pope Francis, who is due to visit Iraq in March, released a statement also condemning the attacks as a "senseless act of brutality."