Sitting at the heart of the Middle East, Iraq shares a border with virtually every major power in the region. The rapid advance of Sunni Islamist militants in Iraq could spark a broader regional conflict. 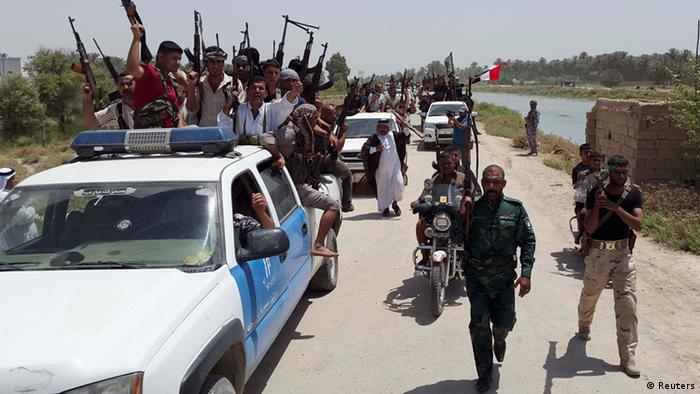 Saudi Foreign Minister Prince Saud al-Faisal warned a meeting of Arab and Muslim leaders in Jeddah on Wednesday that "this grave situation that is storming Iraq carries with it the signs of civil war whose implications for the region we cannot fathom."

Al-Faisal called on Iraq's Shiite-led government to address the grievances of the country's Sunni community. He also warned against "foreign interference" in Iraq, a veiled jibe at Saudi Arabia's archrival, Iran.

Tehran has said that it would intervene on behalf of Iraq, if Baghdad asked for assistance in its fight against the Sunni extremist Islamic State of Iraq and Syria (ISIS). The Wall Street Journal has reported that Iranian units have already been deployed to protect Shia holy sites in Karbala and Najaf and to stabilize the situation in Baghdad.

Meanwhile, the former UN envoy to Syria, Lakhdar Brahimi, has drawn a connection between the current crisis in Iraq and the civil war in neighboring Syria. Brahimi said that the international community had "unfortunately neglected the Syrian problem and did not help resolve it," which has fanned the flames of sectarianism in Iraq.

"The jihadists' action in Iraq is taking place against a backdrop of a civil war between Shiites and Sunnis," Brahimi told the AFP news agency last weekend.

For the past three years, that civil war has largely played out in Syria, where Saudi Arabia's Sunni monarchy and Iran's Shiite theocracy have been waging a sectarian proxy war. Riyadh supports the Sunni rebels in their struggle against Damascus, while Tehran has propped up President Bashar al-Assad. The Assad regime is dominated by Alawites, a branch of Shia Islam.

Formerly called al Qaeda in Iraq, the Sunni militants who now make up ISIS have used the civil war in Syria to regroup, after they were decimated by US troops during Washington's occupation of Iraq. The recent advances made by ISIS against Baghdad present both risks and opportunities for the Saudis and the Iranians.

"They are of course happy that Maliki is now entrapped in this crisis and that the Shia in Iraq are losing ground, but their options are very limited," Bahout told DW.

"[But] playing on ISIS is taking the risk of seeing ISIS become a monster in the region, even endangering their own turf," he said. 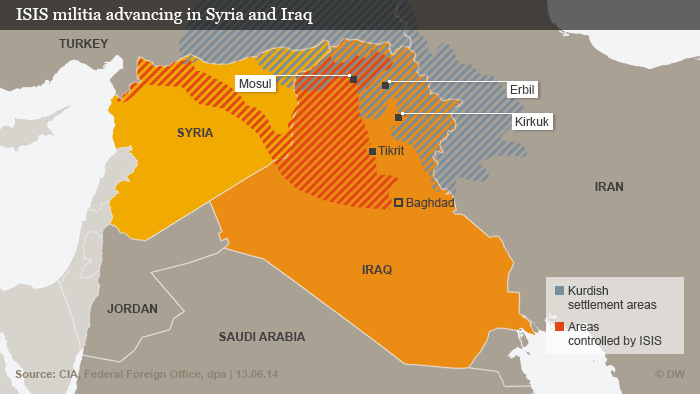 Iranian role contingent on US action

Iran, for its part, has cultivated close ties with the Shiite-led government in neighboring Iraq, particularly since the US withdrawal in 2011. With Maliki now facing an existential crisis, Tehran could offer him military assistance as pretext to expand its influence in the country.

But whether the Islamic Republic will manage to bolster its position in Iraq will largely depend on how Washington responds to the crisis, according to Abbas Kadhim, an Iraq expert at John Hopkins' School of Advanced International Studies (SAIS).

"If the US does not signal soon a strong commitment to help the Iraqi government, I believe the other option will always be getting the Iranians in," Kadhim told DW.

"It's going to be a major competition between Iran and the United States," he said."The Iraqi government, when things get really bad, they're going to tell both sides [that] it's first come, first serve."

As Iran and Saudi Arabia stake out their positions, NATO member Turkey also has vital interests at stake in the Iraq crisis. The autonomous region of Kurdistan has managed to make its own gains in recent days, seizing the disputed oil-rich city of Kirkuk.

Ankara has long been concerned about a move by Iraqi Kurdistan toward greater independence, which it fears could embolden Turkey's own Kurdish minority. In the past, Turkish forces have regularly conducted cross-border raids into northern Iraq, targeting alleged Kurdish militants there.

"If the Kurdish component in Iraq and in Syria is more or less bent upon to fight ISIS, it will probably enhance the Kurdish autonomy," Bahout said. "So it will weigh also on the Kurdish issue in Turkey."

Turkey, which strongly supports the ouster of the Assad regime in Syria, has been accused of training ISIS in their fight against Damascus. But Ankara has strongly denied those allegations.

During the recent advance of ISIS in Iraq, the militants overran Turkey's consulate in Mosul, taking 49 Turkish nationals hostage. That's in addition to 31 Turkish truck drivers who were also captured by the group. So far, Ankara has ruled out the use of military force to free them and has placed its bets on diplomacy.

"All the choices that are made by all the actors in the region are very double edged," Bahout said.

Iraq's Kurdish capital has been flooded by Iraqis driven from their homes for fear of fighting between the Sunni militants of ISIS and the government. But being a refugee is difficult, so some are already heading back. (17.06.2014)