Since defeating "Islamic State" in 2017, Iraq has sentenced hundreds of citizens to death for their alleged affiliation to the militant group. Rights groups accuse Iraq's judiciary of carrying out rushed trials. 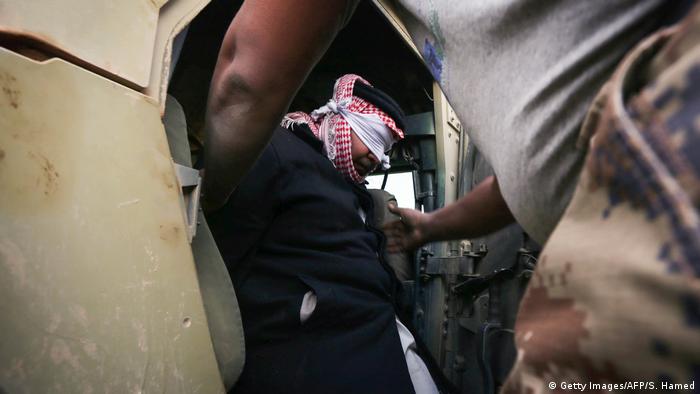 Iraqi authorities on Monday hanged 21 convicted terrorists and murderers at the notorious Nasiriyah prison in the country's south, according to an interior ministry statement.

The men had been convicted under a 2005 counter terrorism law, which carries the death penalty. Authorities did not give details about specific crimes, but the interior ministry statement said some of those executed were involved in two suicide attacks that killed dozens of people in the northern town of Tal Afar.

Since declaring victory over the "Islamic State" (IS) militant group in 2017, Iraq has put hundreds of suspected jihadists on trial and carried out several mass executions.

IS captured a third of Iraq in 2014, but a US-backed military campaign largely defeated the group in both Iraq and neighboring Syria over the following three years.

Read more: US troops hand over military base to Iraqi army

Hundreds of people in Iraq have been convicted in terrorism case, but the authorities have carried out only a small proportion of the sentences, as they must be approved by the country's president.

Iraqi courts have also tried dozens of foreign nationals for alleged IS membership, sentencing 11 French citizens and one Belgian national to death. Those sentences have not been carried out.

Read more: Families of French IS members in Syria battle to bring them back

Iraq's government has declined to provide details about detention centers or prisoners, including how many people are facing terrorism-related charges. According to some studies, around 20,000 are being held for purported IS links.

Some detention facilities have shut down in recent years, including Baghdad's Abu Ghraib complex, which became infamous for prisoner abuse during the US-led occupation of the country.

Iraq ranks fifth among countries that carry out death sentences, according to Amnesty International, which documented 100 executions in the country in 2019. That amounts to one out of seven executions across the world last year.