Fresh protests have broken out in Iraq, with several deaths in the southern city of Nasiriya. Dozens were injured as security forces used tear gas in Baghdad. Fresh anti-government protests broke out in Iraq on Saturday, leaving at least eight people dead. Four were killed in the south of the country and another four in Baghdad's Tahrir Square, where 84 were also injured.

The demonstrations came a day after more than 50 people were killed and another 2,000 were injured as the second wave of angry protests swept the country.

The first four deaths on Saturday occurred in the southern city of Nasiriya, where a further 17 people were injured. A group of protesters also separated from the group of thousands of protesters to attempt to storm the house of a local official.

The protesters set fire to the building and were met with gunfire from guards, according to police.

In Baghdad, security forces used tear gas to disperse protesters in Tahrir Square. Officials report that four people died after being hit in the head by tear gas canisters. 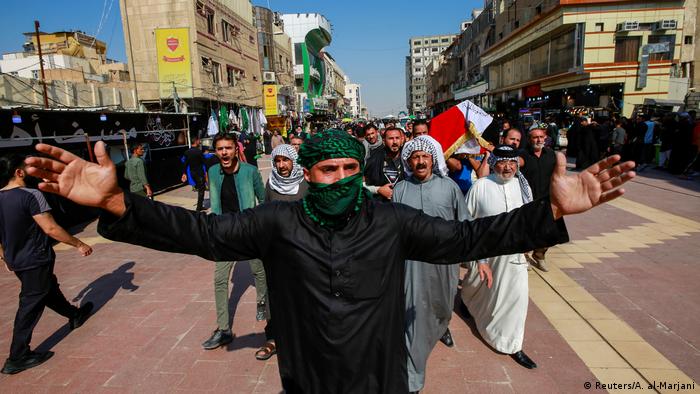 Men carry the coffin of a protester killed on Friday

Protesters brought masks and homemade tear gas remedies with them to the square on Saturday.

Funerals were already held for some of those killed on Friday.

The Iraqi parliament were set to meet on Saturday for an emergency meeting on the protests, but the session was scrapped after lawmakers failed to reach a quorum on how to address protesters' demands.

A heavy security and police presence may have dissuaded some protesters in Iraq's southern provinces, where the demonstrations were concentrated on Friday. A curfew is in effect in most urban areas.

Protesters are seeking reforms to electoral law and a new electoral commission with independent members. They also want to remove the current government.

Thousands of people have been injured across the country since the protests began at the beginning of the month, with almost 200 deaths reported, according to medical sources.

Protesters on Saturday were trying to enter the so-called Green Zone in Baghdad, where the US embassy and Iraqi government headquarters are located.

The civil unrest has endured for a third day across the country. Protesters were venting their fury at Prime Minister Adel Abdul-Mahdi's government, despite a massive security operation aimed at quelling the rebellion. (03.10.2019)

Anti-government protesters have taken to the streets after authorities lifted a two-day round-the-clock curfew. Nearly 100 people have been killed after four days of mass protests in Baghdad and other Iraqi cities. (05.10.2019)