Hundreds of thousands have marched in Iran to mark 34 years since the revolution of Ayatollah Khomeini. Meanwhile, Iran's President Ahmadinejad said he is ready for talks with the US if the West stops pressuring Iran. 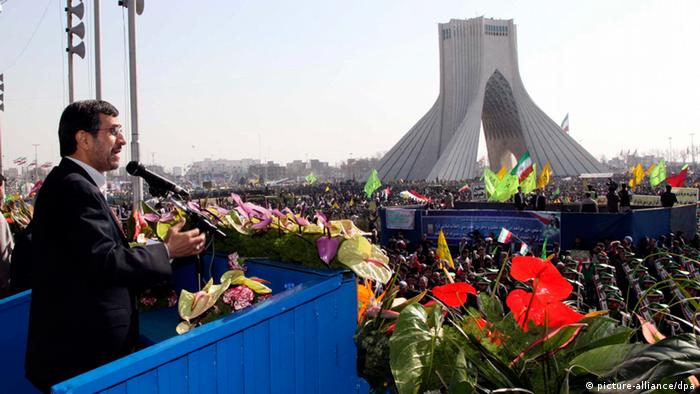 In the capital, Tehran, crowds waving Iranian flags and portraits of Ayatollah Ruhollah Khomeini, the revolution's leader, walked towards Azadi (Freedom) Square in a government-sponsored rally where foreign media were closely monitored. Similar events are expected to take place nationwide on Sunday, especially in large provincial capitals such as Mashhad, Isfahan, Shiraz and Kerman.

Living out of wedlock in Iran

More and more couples in Iran live together despite the fact that they are not married - in face of law and tradition. Conservative religious groups are trying to push the government to reverse this trend. (09.02.2013)

In a speech on the square, President Mahmoud Ahmadinejad remained defiant about his country's developing nuclear program, considered a threat by Israel and the United States especially, but which Iran contends is for energy purposes. On February 7 Supreme Leader Ayatollah Ali Khamenei, who holds the authority to authorize any negotiations, had rebuffed a US call for dialogue. Ahmadinejad seemed to walk that back a bit.

In February 1979, Khomeini returned to Iran from exile in France to lead the revolution that deposed the US-backed Shah Mohammad Reza Pahlavi and brought in the Islamic Republic.

In the 34 years since the revolution, Iran has become increasingly isolated from other countries in the Middle East, as well as Western Europe and the United States. Iran is a successful petroleum exporter but the economy has otherwise struggled, in part owing to strict sanctions imposed to discourage the country's nuclear program. There have also been reports of significant human rights abuses against women and the gay and lesbian community.