President Hassan Rouhani said the "tragic" accidental shooting down of a passenger plane was an "unforgivable error." The first arrests are already underway. 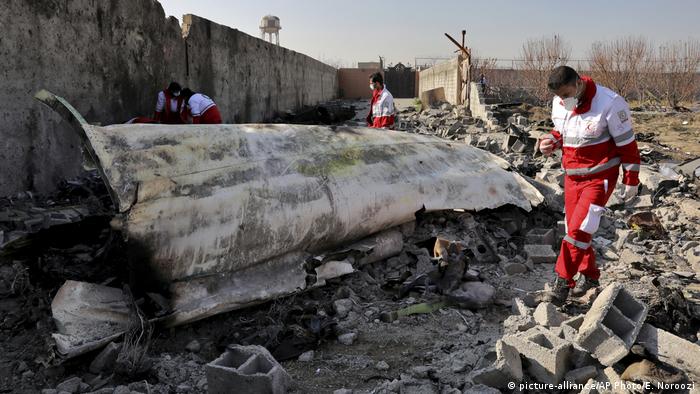 Iranian President Hassan Rouhani on Tuesday said that those responsible for shooting down a Ukrainian passenger jet must be punished.

In a televised speech, the president said it was important that those "at fault or negligent at any level" face justice.

"Anyone who should be punished, must be punished," the president said in a televised speech.

Rouhani added that the "tragic event" would be subject to a thorough investigation. "The judiciary must form a special court with a high-ranking judge and dozens of experts...The whole world will be watching," he said.

At the same time, the president acknowledged the accidental and collective nature of the incident, saying it was "an unforgivable error...one person cannot be solely responsible for the plane crash."

"Iranian armed forces admitting their mistake is a good first step. We should assure people that it will not happen again," Rouhani said.

The president said that his government was "accountable to Iranians and other nations who lost lives in the plane crash."

Arrests related to the crash have already been made, a spokesman for Iran's judiciary said Tuesday, including of a person who posted a video online of a missile striking the Ukrainian airliner.

"Extensive investigations have taken place and some individuals are arrested," said judiciary spokesman Gholamhossein Esmaili in a televised news conference.

While General Amirali Hajizadeh, aerospace commander of Iran's Revolutionary Guard, had taken full responsibility for the disaster, the general says the missile operator who shot down the plane was acting on his own.

"Numerous investigations have been conducted in this area and every night our judicial team has been seeking documents until midnight," Esmaili said. "Suggestions have been made so far, but we have to weigh all the dimensions to get to the truth."

The Ukrainian International Airlines flight took off from Tehran and was en route to the Ukrainian capital, Kyiv, when it was shot down by the Iranian military, killing all 176 people on board.