A senior Iranian official says Tehran would ban inspectors from military sites under any nuclear agreement with world powers. Iran has likened international inspections to being under foreign occupation. 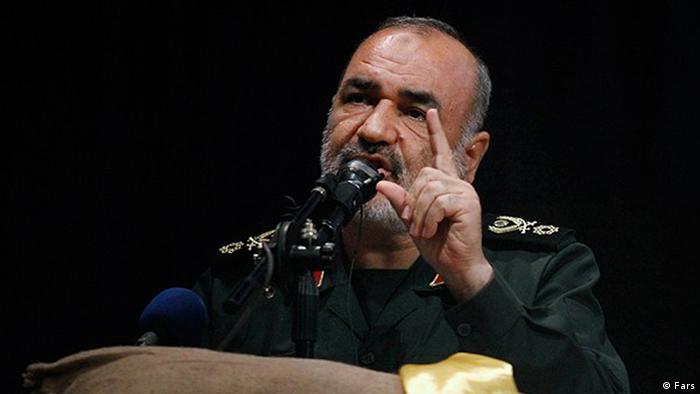 General Hossein Salami (pictured above at a press conference in 2014), deputy leader of Iran's Revolutionary Guard, said on state television Sunday that allowing foreign inspectors to enter military sites is tantamount to “selling out.”

"A tour of military facilities by foreign inspectors is to be equated with the occupation of a country," Salami was quoted as saying by the Iranian news agency ISNA. "Iran will not become a paradise for spies. We will not roll out the red carpet for the enemy."

Iran and five UN veto countries - France, the UK, the USA, China and Russia, plus Germany - have reached a framework agreement to limit Tehran's nuclear program in exchange for sanctions relief.

Negotiators have sent June 30 as the deadline for a final deal.

The US State Department statement on the framework accord said Iran would be required to give the United Nations nuclear agency access to any "suspicious sites."

Tehran queried that and other statements within the framework, most notably that sanctions would first be lifted after the International Atomic Energy Agency (IAEA) verified Iran's conformity of the agreement.

Iran has argued that the sanctions should be lifted on the first day of the final deal's implementation.

The framework agreement also requires Iran to significantly scale down its nuclear program for 10 years, in return for the lifting of sanctions that have battered its economy.

The document also said Iran had agreed to execute the Additional Protocol to the Non-Proliferation Treaty, which would give the IAEA greater access to declared and undeclared nuclear facilities across Iran.

"It means humiliating a nation," Salami said in his television address.

"They will not even be permitted to inspect the most normal military site in their dreams."

As a confidence-building measure, Tehran allowed IAEA inspectors to enter the Parchin military site in 2005. It denied any further visits, fearing espionage.

Western countries have long suspected Tehran of secretly pushing its nuclear weapons capabilities. Iran has denied the allegations, and asserts its nuclear program is peaceful.

Iran has presented a plan to the UN in a bid to end the conflict in Yemen. The proposal calls for international action to put an end to the Saudi-led airstrikes against Houthi rebels believed to be backed by Tehran. (18.04.2015)

In an interview with Deutsche Welle, former IAEA nuclear inspector Robert Kelley suspects the nuclear watchdog could be misused as a tool to derail the nuclear deal with Iran. (16.04.2015)

The latest round of talks between the UN's nuclear watchdog agency and Iran over its nuclear program have failed to produce a breakthrough. There is no word on when the two sides would next meet. (16.04.2015)