Reports of an "explosion" on an Iranian cargo ship in busy waters off the Yemeni coast have been confirmed. The ship is suspected of functioning as a military base for the Revolutionary Guard. 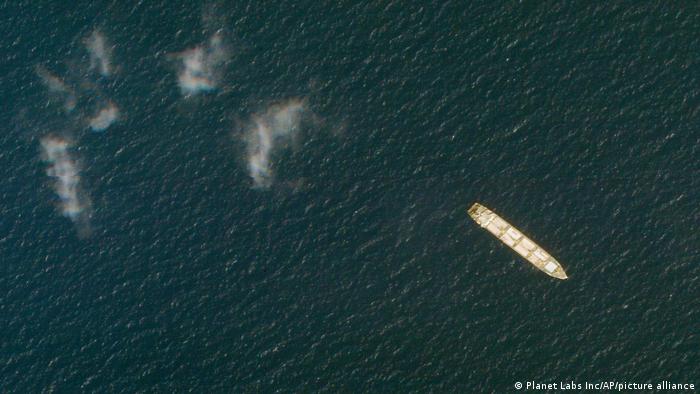 Iran's Foreign Ministry confirmed on Wednesday that the MV Saviz ship anchored in the Red Sea was damaged during an attack.

The cargo ship has been seen in the seas around Yemen since 2016, casting suspicions that it is being used as a base for the paramilitary Revolutionary Guard (IRGC) to supply Iranian-backed Houthi rebels.

The vessel was damaged on Tuesday after limpet mines attached to the hull exploded, the semi-official news agency Tasnim reported.

Said Khatibzadeh, a spokesperson for the Foreign Ministry, said that "the ship was partially damaged, fortunately, nobody was injured."

An article in the New York Times suggested that Israel was behind the attack. On Tuesday, Iranian diplomats sat down in Vienna for talks aimed at renewing the nuclear deal.

'A violent confrontation is the last resort'

US official says Israel is responsible

Israel has not yet commented, but the New York Times cited an American official who said Israeli authorities informed the US that their forces had struck the ship on Tuesday morning.

The US told the paper Israel's attack was a "retaliation for earlier Iranian strikes on Israeli vessels."

US military central command said it was not involved in the incident.

Questions over ship's use

The Washington Institute for Near-East Policy has called the Saviz an "Iranian mothership." It considers the vessel a base for intelligence gathering and an armory for the Revolutionary Guard.

Saudi Arabia had long complained of the presence of the Iranian ship in the region. At the same time, UN experts have accused Iran of arming Yemen's Houthi rebels, fueling a years-long war.

Tehran has rejected the accusations, saying that the ship was playing an "anti-piracy" role in the Red Sea and Bab el-Mandeb Strait, a chokepoint for international shipping.

The clash may prove troublesome for the Biden administration as it attempts to return to the 2015 Iran nuclear deal. Tehran and Washington described indirect talks in Vienna on Tuesday as "constructive."