Iran Opens Nuclear Facility, Says No Threat to Israel | News and current affairs from Germany and around the world | DW | 26.08.2006

President Mahmoud Ahmadinejad insisted Saturday that Iran is no threat to Israel as he inaugurated a heavy-water production plant five days before a UN Security Council deadline to suspend nuclear fuel cycle work. 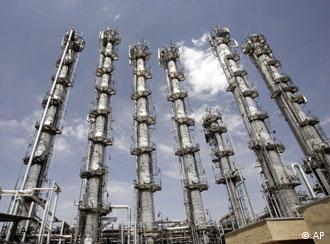 Opening the controversial facility, which the West believes may be used to acquire an atomic weapon, Ahmadinejad repeated Iran's desire for peaceful nuclear energy, saying his country posed no threat to arch-foe Israel.

"The message of the Iranian nation is peace, calm and cohabitation with all nations based on justice," he said. "We are no threat to any nation, even the Zionist regime."

"They must accept the reality of a strong Iran, developed and a supporter of peace," he said as he opened the Arak plant which will supply heavy water to be used as cooling fluid for a 40 MW research reactor due for completion by 2009.

The International Atomic Energy Agency has voiced concern over the risk of diversion of nuclear materials as the research reactor could produce 8-10 kilograms (about 20 pounds) of plutonium a year, enough to make at least two nuclear bombs.

The high-security complex and its approach road are protected by dozens of anti-aircraft gun positions in preparation for a possible Israeli or US air strike against Iran's controversial nuclear facilities.

But the hardline leader also said the Islamic republic would defend its right to nuclear technology "with force." 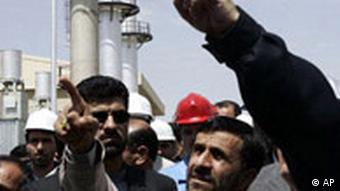 Western countries led by the United States believe that Iran is seeking to build an atomic bomb, but the Islamic republic insists it only wants civil nuclear power and has the right to master the required technology.

"The Islamic republic considers inauguration of this complex within the framework of its legal and international rights," foreign ministry spokesman Hamid Reza Asefi was quoted as saying.

"This is another big step for the Islamic republic to use its undeniable right, namely achievement of peaceful nuclear technology," Asefi said.

"We have done the project from the beginning to the end all by ourselves, without assistance of anybody. That is why we are so proud," said a young engineer who gave his name as Khazai.

According to the facility's director, Manouchehr Aghazadeh, it will produce 80 tons of heavy water a year.

Despite Iranians' celebration of the achievement, a UN Security Council deadline is looming on August 31 for Iran to halt sensitive nuclear activities. 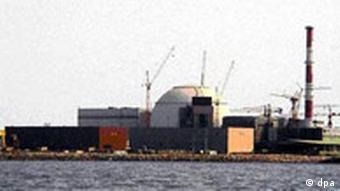 Tehran risks possible economic sanctions if it continues to refuse the demand.

However, the West's reactions to Tehran's reply did not bring much hope for a smooth settlement of the nuclear standoff.

Washington repeated a call on the United Nations to move swiftly to impose sanctions against Iran after the August 31 deadline.

"There must be consequences if people thumb their nose at the United Nations Security Council. We will work with people on the Security Council to achieve that objective," US President George W. Bush said.

In defiance of a UN resolution, Iran has insisted it will not freeze uranium enrichment and warned it could even expand its nuclear program, which the West fears is a cover for efforts to build the bomb. (Aug. 7, 2006)

Germany and France have joined the US in voicing displeasure with Iran's response to an offer from six world powers of negotiations on trade, technology and security benefits if Iran freezes its nuclear program. (Aug. 25, 2006)

As the EU ponders what to do, Iran's offer to resolve the nuclear crisis is already setting off disagreement over how to best respond: the US wants sanctions while many such as Russia and China counsel patience. (Aug. 23, 2006)