High-ranking European diplomats say Tehran has demanded changes to compromises agreed during "many months of hard work" on its nuclear program. Talks will resume next week in Vienna. 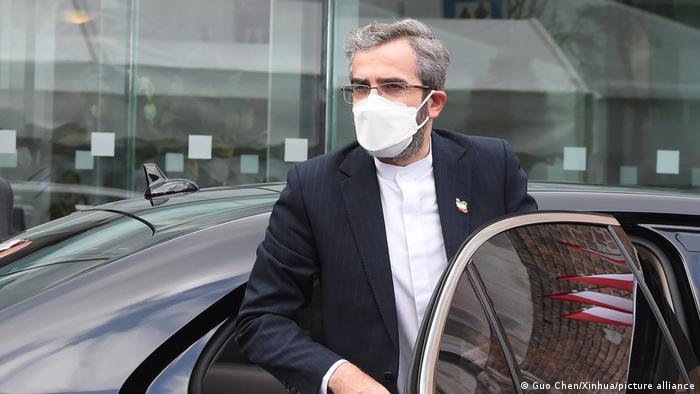 Diplomats, including Iran's Ali Bagheri Kani, will consult with their capitals and meet again next week

European diplomats expressed "disappointment and concern" on Friday after five days of international negotiations in Vienna on reviving the Iran nuclear deal.

Senior diplomats from the E3 group of Britain, France and Germany accused Tehran of "walking back almost all of the difficult compromises crafted after many months of hard work," and that the Iranian delegation had demanded "major changes" to the text.

The diplomats said they "thoroughly and carefully" analyzed Iran's "proposed changes to the text negotiated during the previous six rounds" of talks that took place earlier this year.

They went on to say it was "unclear how these new gaps can be closed in a realistic timeframe."

The diplomats warned that time is running out, but added that the delegations would reconvene next week "to see whether gaps can be closed or not."

What is the focus of the latest Iran talks?

The latest round of talks began on Monday with the E3, Iran, China and Russia at the table and the US participating indirectly.

Diplomats are aiming to revive the so-called Joint Comprehensive Plan of Action, or JCPOA, which Tehran and the world powers signed in 2015. The Iran nuclear deal, as it is more popularly known, sought to limit Iran's nuclear ambitions in return for the lifting of international sanctions.

But the JCPOA unraveled in 2018 when US President Donald Trump pulled out of the deal under a "maximum pressure" campaign against Tehran.

Tehran now enriches small amounts of uranium up to 60% purity — a short step from weapons-grade levels of 90%.

Iran also spins advanced centrifuges barred by the accord, and its uranium stockpile now far exceeds the accord's limits.

The remaining signatories to the nuclear deal — Iran, Russia, China, France, Germany and Britain —  have been meeting at the Palais Coburg, a luxury hotel where the agreement was signed six years ago.

A US delegation headed by the Biden administration's special envoy for Iran, Robert Malley, is staying at a nearby hotel and being briefed on the talks by diplomats from the other countries.

The European Union official chairing the meeting said there had been some progress, but further "convergence'' was necessary.

"We have identified the challenges ahead. Now it is time to consult with capitals," EU diplomat Enrique Mora told reporters. "We will be resuming here in Vienna next week."

Mora said reviving the agreement would require Iran to meet its commitments under the accord, and bring the United States back into "full compliance," meaning Washington would need to drop the crippling economic sanctions it imposed on Tehran.

"We are incorporating also new policy sensitivities for the new Iranian delegations," he said. "But again, the point of departure, the common ground is where we finished on the 20th of June."

Iran has said its nuclear program is peaceful, but US intelligence agencies fear that the program is a cover for the development of nuclear weapons.