Iranian leaders have expressed skepticism about whether an agreement with six major powers over its nuclear program will ever be implemented. This follows a tentative deal reached in Switzerland last week. 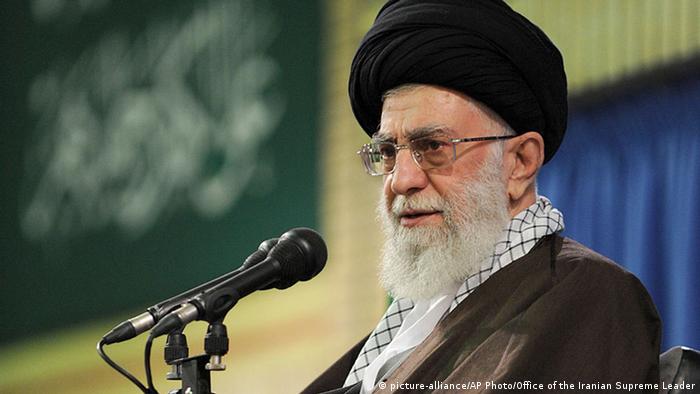 Speaking in a nationally televised address on Thursday, Iran's supreme leader, Ayatollah Ali Khamenei (pictured above), said he neither supported nor opposed the tentative framework deal meant to curb Tehran's nuclear program in return for the lifting of economic sanctions on the Islamic Republic.

"Everything is in the details; it may be that the deceptive other side wants to restrict us in the details," he said, referring to the five permanent members of the United Nations Security Council plus Germany, which have been negotiating with Iran over its contentious nuclear program for years.

"What has been done so far does not guarantee an agreement, nor its contents, nor even that the negotiations will continue to the end," added Khamenei, who as the country's top official has the last say on all state matters.

Just hours earlier, the country's president, Hassan Rouhani, also struck a cautionary note, days after Iranians took to the streets to celebrate the tentative deal, in the hope that a final agreement would be reached by a June 30 deadline.

"We will not sign any agreement, unless all economic sanctions are totally lifted on the first day of the implementation of the deal," Rouhani said during a ceremony marking Iran's annual nuclear technology day, which celebrates the country's achievements in the field.

The agreement reached in the Swiss city of Lausanne is meant to prevent Iran from attaining nuclear weapons production capability in exchange for lifting economic sanctions, which have severely restricted the country's economy.

Both leaders also devoted part of their remarks on Thursday to criticizing Saudi Arabia and its allies for launching a campaign of air strikes against Shiite Houthi rebels in neighboring Yemen.

"The aggression by Saudi Arabia against Yemen and its innocent people was a mistake," Khamenei said. "This is a crime and genocide that can be prosecuted in international courts."

Earlier, Rouhani said the Saudi air strikes would not bring Yemen any closer to peace.

"A nation does not give in through bombing," Rouhani said. "Do not kill innocent children. Let's think about an end to the war, about ceasefire and humanitarian assistance to the suffering people of Yemen."

Iran is widely thought to be supporting the Houthi rebels who are fighting along with forces loyal to Yemen's former president, Ali Abdullah Saleh, in an effort to oust current President Abed Rabbo Mansour Hadi, who fled to the Saudi capital, Riyadh, as the Shiite forces threatened to overrun the southern port of Aden.

President Hassan Rouhani has said Iran will honor a framework for a nuclear accord provided that the six world powers involved in talks also uphold their side of the deal. He described the move as a "historic agreement." (03.04.2015)