Iran has unveiled its latest domestically developed warship, which state media claims has stealth properties. Tehran has developed a large domestic arms industry in the face of international sanctions. 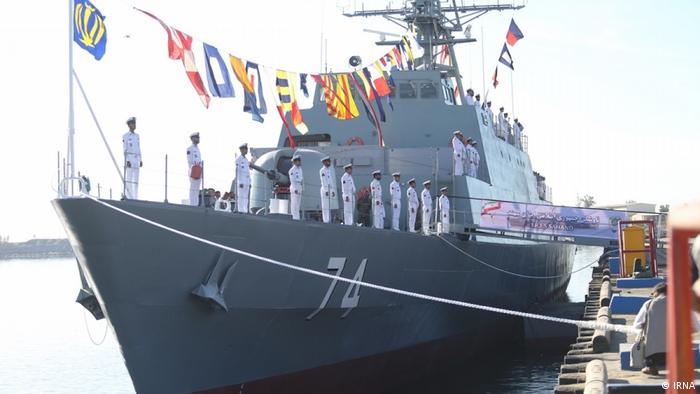 Iran's navy unveiled its latest warship in the port city of Bandar Abbas on Saturday, amid rising tensions over the recent reimposition of US sanctions.

The Sahand destroyer joined the rest of the fleet at the mouth of the strategic Strait of Hormuz, in a ceremony carried live on state television.

The domestically produced vessel, which has a flight deck for helicopters, can evade radar detection and sustain voyages lasting five months without resupply.

The IRNA news agency cited Admiral Alireza Sheikhi, commander of the navy's factories, as hailing advances in domestic technical knowledge that helped to equip the Sahand with stealth technology.

Read more: Iran's Rouhani calls for all Muslims to stand against US

The Sahand is also powered by four robust engines, as opposed to two in the Jamaran, IRNA said.

The two vessels mark a substantial technological leap for Iran, which established a large domestic arms industry after being banned from importing many weapons in a dispute with the West over its nuclear program. Many of the sanctions imposed on Tehran ended following a landmark agreement between six world powers, signed in 2016.

However, US President Donald Trump decided in May to pull the US out of the deal, forcing relations between Tehran and Washington to new lows.

The US ordered the resumption of sanctions and said its goal was to reduce Iran's oil exports to zero. In response, Tehran threatened to blockade a major Middle East oil artery, the Strait of Hormuz.

The EU and the Iran deal

Iran's navy has extended its reach in recent years, launching vessels in the Indian Ocean and the Gulf of Aden to protect Iranian ships from Somali pirates operating in the area.

Iran said in 2016 that it might seek to set up naval bases in Yemen or Syria in the future.

A naval commander said separately on Saturday that the Sahand might be among warships that Iran plans to send on a mission to Venezuela soon.

Iran has started manufacturing its own locally designed fighter jet for use in its air force, state TV reported. It comes as Donald Trump's administration prepares to impose another set of sanctions on Tehran. (03.11.2018)

The new measures target 700 individual and entities in the financial, shipping and energy sectors. Eight countries, including Turkey, will be given waivers to keep buying Iranian oil. (02.11.2018)

US Ambassador to Germany Richard Grenell has welcomed German companies' decision to comply with US sanctions and stop business with Iran. Washington warned firms that trade with Iran that they could face repercussions. (22.11.2018)