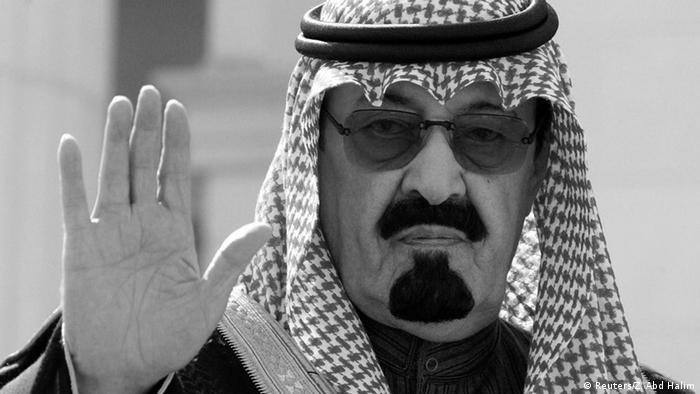 Jordan's King Abdullah II and other dignitaries left the World Economic Forum on Friday, flying home early after getting the news of the death of Saudi King Abdullah. Turkish President Recep Tayyip Erdogan has postponed his planned trip to Somalia to attend the funeral. Even regional rival Iran has offered condolences to the people and government of Saudi Arabia and announced that Foreign Minister Mohammad Javad Zarif would travel to Riyadh.

The Philippines, a major supplier of migrant labor to the Middle East, also sent kind words. "The late king was a courageous, generous and visionary leader who introduced policy changes in education and infrastructure," read a statement from the Foreign Ministry. "He was a champion in fighting extremism."

Abdullah became king in 2005 but had filled the role unofficially since 1996, after his brother Fahd became incapacitated by a 1995 stroke. It remains to be seen whether King Salman, his brother and successor, will continue the modest reforms initiated by Abdullah, who was 90 and in 2002 had attempted to help broker the Arab Peace Initiative with Israel.

"He was an experienced leader and a wise king," former Israeli President Shimon Peres said Friday in Davos. "He had the courage ... to stand up and introduce a peace program for the Middle East."

The 79-year-old Salman, who had served as defense minister before becoming king, appointed his son Mohammed bin Salman to take his place, state television reported. The king decided to keep other ministers - including in the foreign, oil and finance portfolios - in their positions. However, Salman relieved Khaled al-Tuwaijri, head of the royal court under the late King Abdullah, of his post.

"We will continue adhering to the correct policies which Saudi Arabia has followed since its establishment," Salman said in a speech on state-run Saudi 2.

Salman also named Prince Mohammed bin Nayef, the current interior minister, the new deputy crown prince, according to a royal decree. Nayef, aged 55 and the grandson of Abdul Aziz ibn Saud - Salman's father and the kingdom's founder - would become the first of his generation to fill the throne. Ibn Saud's sons have ruled since the founding monarch's death in 1953; two brothers ahead of Salman in the succession line died while waiting their turn for the throne.