Iran: Female soccer fan dies after setting herself on fire

An Iranian woman known as the "Blue Girl" set herself on fire after being handed a prison sentence for trying to enter a soccer stadium. Her death sparked outrage on social media, with some calling for a stadium boycott. 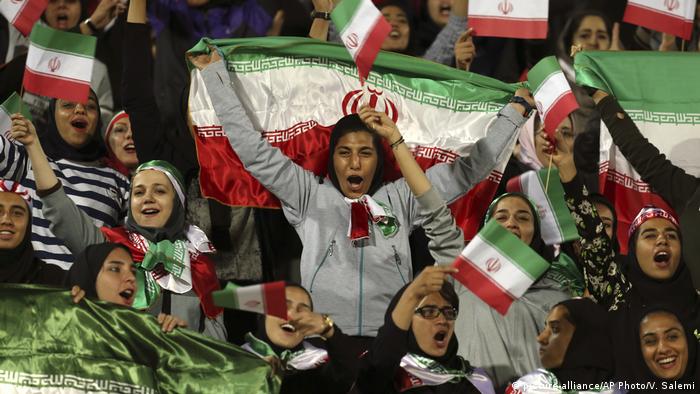 A 29-year-old woman protesting against Iran's ban on women being allowed in soccer stadiums died of her injuries after setting herself on fire, local media reported on Tuesday.

The woman, identified as Sahar Khodayari, doused herself in petrol and set herself on fire outside a court last week after learning she'd been handed a 6-month prison sentence for trying to enter a stadium.

Khodayari, who was also known as the "Blue Girl," tried to enter a stadium in March to watch her favorite Iranian soccer team, Esteghlal.

She had disguised herself as a man, donning a blue hairpiece and long overcoat.

Khodayari was arrested and initially released on bail, but her six-month prison sentence was confirmed again last week. Pictures of the woman covered in bandages at the hospital were shared widely on social media.

Iran's judiciary has been asked to investigate her death, state media later reported.

"Her family received a warning and is not allowed to talk to the media anymore," Maziyar Bahari, an Iranian-Canadian journalist and filmmaker who is in contract with Khodayari's family, told DW. "Sahar died on Friday and the security services buried her immediately. The authorities told her family: 'Your daughter has caused us enough trouble already; we don't want to hear anything more from you.' Her relatives have been severely intimidated."

'We are all responsible'

News of her death sparked an outcry on social media, with some Iranian users blaming the stadium ban and the actions of the court and police for her death.

"She was forced to take her very simple wish to the grave," her favorite soccer club Esteghlal wrote in a statement.

Former Bayern Munich midfielder Ali Karimi, who played for several years on the Iranian national team, wrote on Instagram that "the stadium ban for women is disgusting."

Others called for FIFA to ban Iran from international competitions.

"We are all responsible," Iranian lawmaker Parvaneh Salahshouri wrote on Twitter, saying that Khodayari "wasn't just the 'Blue Girl.' She was Iran's girl, from a country where men decide what women should or shouldn't do."

Iran's ban on women being allowed to enter stadiums has been a point of contention in Iran for decades. Although Iranian President Hassan Rouhani has said he is in favor of lifting the ban, he has not been able to change the rule due to resistance from Iran's clergy.

"The love of football is a pure love," Dariush Mostafavi, a former head of Iran's FA, said in an interview. "Our national Olympic Committee's motto is human freedom. What will the world think of us when they find out what has happened here?"