Iran had denied responsibility in the immediate aftermath of the January 2020 crash before admitting that a "disastrous mistake" had occurred. Now, 10 officers have been indicted in Tehran. 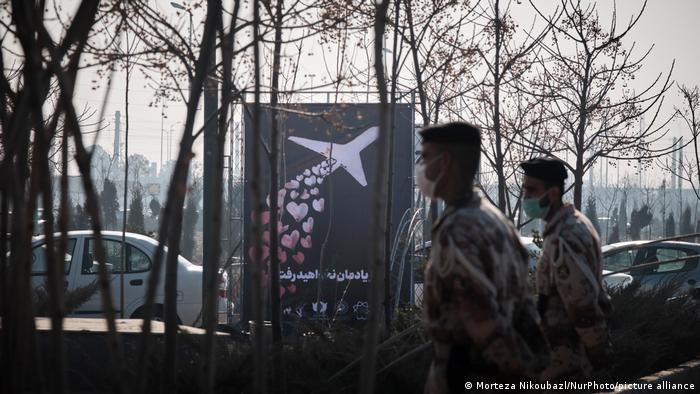 An Iranian military court has brought charges against 10 officers for the shooting down of a Ukrainian passenger plane in January, 2020, a prosecutor said on Tuesday.

The Ukraine International Airlines flight was accidentally taken down by Iran's Revolutionary Guard shortly after taking off from Tehran, resulting in the death of all 176 on board.

Shot down amid heightened tensions with US

"Indictments have been issued for 10 officials involved in the crash of the Ukrainian plane... and necessary decisions will be taken in court," Gholam Abbas Torki, the outgoing military prosecutor for Tehran province, was quoted as saying by Iran's semiofficial ISNA news agency.

The victims from the crash were mainly Ukrainian and Iranian, though Canadian, Afghan, British and Swedish nationals also perished.

Tehran later said the incident was a "disastrous mistake" by its forces at a time when they were on high alert, days after a US drone strike killed Qassem Soleimani, a leading Iranian general, and just hours after retaliatory Iranian strikes on US facilities in Iraq.

Iranian President Hassan Rouhani has repeatedly called for those responsible to be held to account by means of a trial.

The Iranian leadership, though, only admitted responsibility after initial denials, which led to anti-government protests, as citizens said there had been an attempt at a cover-up.

Exactly a year after the downing of a Ukrainian airlines jetliner, five nations — including Ukraine, Canada and the UK — have demanded a full explanation from Tehran.

It's been a year since senior Iranian military leader Qassem Soleimani was killed in a US-directed drone attack while visiting Baghdad. Hundreds of mourners have gathered in the Iraqi capital, ahead of a protest.

Iraqis fear a flare-up in sectarian tensions after Iran vowed revenge for killing military leader Qassem Soleimani in January. But some fear that factions within the Iraqi security forces could also threaten stability.