Iranian President Hassan Rouhani has urged US President Donald Trump to get rid of more hawkish officials to improve ties with his country, following the firing of Trump's national security adviser, John Bolton. 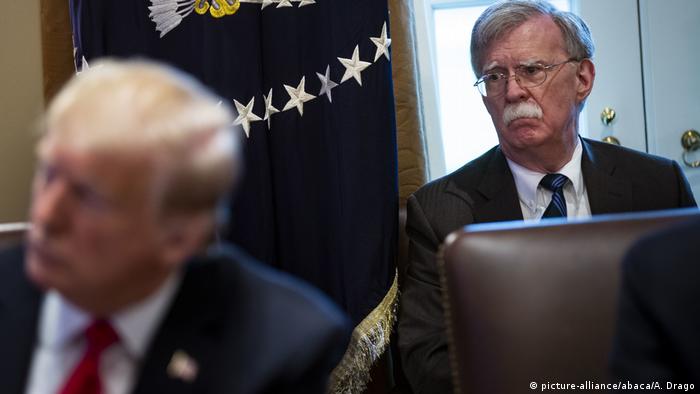 Iran said Wednesday the sacking of John Bolton as President Donald Trump's national security adviser will not necessarily pave the way for negotiations with the United States.

Takhteravanchi said there was no reason to engage in talks while the US sanctions against Iran remain in place.

"As long as the US government's economic terrorism and such cruel sanctions are imposed on the Iranian people, there is no room for negotiations," the Iranian envoy said, adding that any meeting must be held within the framework of the group of major powers that negotiated the 2015 nuclear deal.

Read more: Iran toughens opposition to bilateral talks with US

Although Trump had said in the past that he was open to talks with Iranian officials, Bolton's departure has raised hopes about such meeting.

"The removal of John Bolton is an internal affair and we don't take stands on domestic issues," said Takhteravanchi.

Bolton is closely linked to the 2003 invasion of Iraq and other aggressive US foreign policy decisions. Analysts have said he had been one of the main driving forces in the White House's tough line toward Iran, North Korea and Venezuela, among others.

Rouhani, however, signaled a possible thaw in US-Iran relations if Trump "put warmongers aside."

Rouhani's website quoted him as urging the US to also abandon the "maximum pressure policy" on Iran.

Ali Rabiei, a government spokesman, said after the meeting that Bolton's dismissal may help the US have a "less biased" attitude toward Iran, calling Bolton "the symbol of America's hawkish policies and its animosity toward Iran."

Rouhani announced Wednesday that his country would soon begin researching and developing improved centrifuges to speed up the process of enriching uranium.

The move marks Iran's third breach of the international deal it signed in 2015, under which it agreed to limit its nuclear program in exchange for economic sanctions relief.

In July, Iran abandoned two of its commitments under the deal by allowing its stockpile of enriched uranium to exceed the 300-kilogram limit and breaching the cap on the purity of its uranium stocks.

The 2015 deal was struck after concerns from the US and its allies that the nuclear program, which Iran insisted was for civilian use, aimed to produce weapons. US President Donald Trump unilaterally withdrew from the accord last year and reimposed sanctions on Iran.

Read more: UN nuclear watchdog: 'Time is of the essence' on Iran cooperation