IOC and China Parry as EU Moots Olympic Boycott | Europe| News and current affairs from around the continent | DW | 10.04.2008

The International Olympic Committee (IOC) urged China to fulfill its promises to respect human rights as the EU Parliament passed a non-binding resolution in favor of a boycott of the opening ceremonies in Beijing. 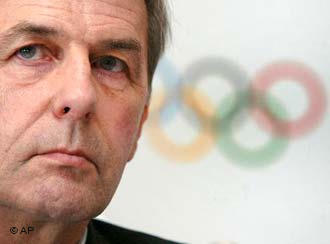 In a vote on Thursday, April 10, the EU Parliament expressed its support for a boycott of the opening ceremonies to the 2008 Olympic Games in Beijing on Aug. 8, if China remains unwilling to engage in dialogue with the Dalai Lama.

Parliament appealed to EU states to consider not participating in the ceremonies, though Thursday's resolution is not binding for the bloc's 27 members.

European parliamentarians condemned the "brutal actions of Chinese security forces against Tibetan demonstrators" and appealed to the United Nations to investigate the most recent cases of violence and unrest in Tibet.

IOC reminds China of its promises 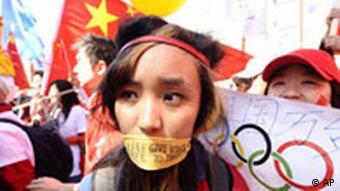 In light of China's crackdown on protestors demonstrating for Tibetan independence, IOC President Jacques Rogge on Thursday urged China to respect its "moral engagement" to improve human rights. He also called on the host country to fulfill the promises it had made in its Olympic bid to advance human rights and promote greater press freedom.

Speaking after a meeting with Chinese Premier Wen Jiabao in Beijing, Rogge said that weeks of protest surrounding the ongoing Olympic torch relay had thrown the Games into "crisis."

Demonstrators protesting China's treatment of Tibet have followed the torch since it was lit in Greece on March 24. The relay was disrupted so severely by protestors in Paris that the torch had to be extinguished several times.

Rogge expressed relief that the relay went more smoothly in San Francisco this week, where organizers shortened its course and made a last-minute route change to circumvent protestors. He said the relay would continue on its 20-country journey as planned.

The IOC chief also told the heads of 205 national Olympic Committees they should pass on the message to their athletes that "we will rebound from this current crisis."

The Chinese government fired back that politics should be kept out of the Olympics.

"I believe IOC officials support the Beijing Olympics" and hope they continue to "adhere to the Olympic charter of not bringing in any irrelevant political factors," Chinese foreign ministry spokeswoman Jiang Yu told reporters.

"The human rights situation in China today is better than ever before," said the ambassador. "Before the founding of new China, the country was a semi-feudal, semi-colonial society and exposed to humiliation from abroad."

According to a report by human rights watchdog Amnesty International, the human rights situation in China has considerably worsened in the run-up to the summer Games.

Tibetan exiles have reported 150 deaths resulting from a crackdown last month by Chinese military and security forces in response to freedom protests. Chinese authorities have said that Tibetan rioters killed 20 people and repeatedly blamed the Dalai Lama for the unrest.

Despite heavy protests along the route, Olympic organizers have said the torch relay will continue as planned

A visit to Nepal gave German lawmakers insights into the difficult situation for Tibetan monks, but did not lead to calls for an Olympic boycott. (09.04.2008)

The Darkness of the Torch

Although Greece was the birthplace of the Olympics, the idea for the torch relay came from the Nazis and was first used for the Berlin Games in 1936. (09.04.2008)

Olympics leaders are to review this week whether the torch relays ahead of the Games should continue given global protests. But the demonstrations, European papers said, are the true expression of freedom. (08.04.2008)

Do you support any kind of Olympic boycott? Why or why not? Please include your name and country in your reply.