Investing in bamboo to curb floods in Kenya

In Kenya, floods and landslides killed around 100 people and displaced nearly 300,000 between March and May 2018. Smallholder farmers along the Upper Tana River basin are now investing in bamboo trees to curb floods. 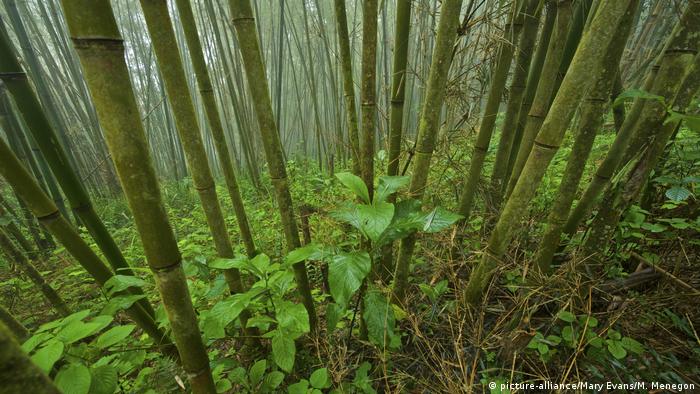 Many of the Kenyan communities affected by floods and landslides this year were already struggling to recover from the 2017 drought - a result of a failed rainy season in 2016 and unusually high temperatures.

"The rainfall patterns have completely shifted. We are receiving more torrential rains of high intensity, accompanied by flooding," Catherine Muthuri, a research scientist at the World Agroforestry Center in Nairobi, told DW.

Smallholder farmers along the Upper Tana River basin in central Kenya have turned to bamboo trees in a bid to reduce sediments flowing into rivers, repair the riparian areas alongside the rivers and stabilize land that is prone to landslides.

"We are promoting bamboo trees in flood and landslide-prone areas to help stabilize the soils. We aim to help restore and repair the riparian [areas] already destroyed by floods, and reduce sedimentation flowing into the rivers," said Anthony Kariuki, general manager of the Nairobi Water Fund. 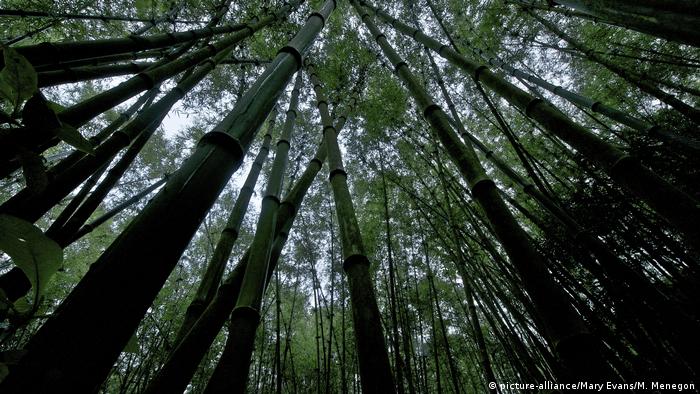 The Upper Tana River basin covers approximately 17,000 square kilometers (4,200,785 acres) and is of critical importance to the Kenyan economy. Home to 5.3 million people, its water provides half of the country's hydropower output. It supplies 95 percent of Nairobi city's water, according to the Nairobi Water Fund. Kariuki clarified that a bamboo-rooting system helps retains water in the ground, binds the soils and helps filter out sediments, thereby reducing the amount of sediments that flow into the rivers downstream.

"Bamboo covers the soil through its canopy, reducing evaporation, hence rehabilitating highly degraded areas faster. Depending on the species it forms a canopy (shelter) within the first four years compared to other trees that can take about 15 to 30 years," Peter Kung'u, who is in charge of bamboo propagation at the Kenya Forestry Research Institute (KEFRI), told DW.

Read more: Trees with tricks in their trunks

The International Network for Bamboo and Rattan (INBAR) highlights bamboo as a core development resource that can help create a wealth of practical solutions while reducing the negative effects that changing climate patterns have on millions of rural communities.

INBAR says bamboo is critical in building climate resilient communities and can help the poor control flooding while protecting the environment, biodiversity and the ecosystem.

Floods cause devastation in Kenya

Of the more than 1,400 different species of bamboo trees found globally, about 14 species are found in Africa, according to Kung'u. While three are found in mainland Africa, 11 species are located on the island of Madagascar. Bamboo has existed for hundreds of years in Asia, Latin America and parts of Africa.

Known as "the wonder grass," bamboo is a fast growing woody grass naturally found in diverse climates. Plants usually grow three to five feet (0.9 to 1.5 meters) high annually. Their stems range from one mm to 30 cm (11.8 inches) which is why they are sometimes called "bamboo trees." After harvesting, new shoots appear from the roots every year. In four to five years, these shoots grow to harvestable size.

"Bamboo plays a valuable environmental role. Its complex root system acts as an efficient water filter, removing nutrients and dangerous poisons such as heavy metals before they get into the food chain," Kung'u said.

"Additionally, its ability to grow faster than many hardwoods makes bamboo ideal for absorbing greenhouse gases [such as carbon dioxide], compacting desertification and global warming," he added.

Carbon dioxide (CO2) is an important heat-trapping gas, released through human activities such as deforestation and the burning of fossil fuels.

In 2015, the Paris Agreement formally recognized the key role played by landscapes and resilient forests in reducing the global average temperature to less than two degrees Celsius above pre-industrial levels.

Farmers need to see the benefits

While research scientist Muthuri agrees that bamboo is one of the plant species that can help tackle climate change, she underlines the need to combine it with other crops.

"Bamboo is attractive to rehabilitate areas that are deforested. We have a wide range of species, adaptable to every place, but it's not a one fit situation," Muthuri warns. "They take time to establish but once established they take very little time to grow."

Muthuri sees bamboo's potential along river banks and farm borders as a buffer and water filter "but it's not an attractive species for the farmlands unless [there is an] economic incentive for the farmers."

Smallholder farmers along the Upper Tana Basin have planted about 65,000 bamboo seedlings since last year across the watershed, according to Kariuki.

The Nairobi Water Fund is training them in bamboo-farming practices and linking them to markets "as an incentive to improve their economic livelihoods through selling bamboo products such as firewood, charcoal, animal feeds, building and fencing materials."

This comes after Kenya issued a logging ban for its forests earlier this year. It has also embarked on evicting communities illegally settled in its indigenous forests.

Growing up in a South African township, Ndivile Mokoena realized early that women, children and society's poorest are hit hardest by environmental issues. Now she works for gender equality and climate justice globally. (06.03.2018)

The 77 Percent: Bamboo innovation in Uganda