The highly venomous lionfish has been seen off the coast of Italy for the first time, confirming fears the invasive species has expanded its range in the Mediterranean Sea. It has already devastated Atlantic ecosystems.

The lionfish, an extravagantly frilled trespasser from the South Pacific and Indian Ocean, has been slowly spreading through the relatively warm waters of the Mediterranean ever since it was first spotted off the coast of Israel in 1991.

Over the last two decades the poisonous threat has been found in the waters near Turkey, Cyprus and Lebanon and, in 2015, off Tunisia, according to the International Union for the Conservation of Nature (IUCN).

But now, just months before the summer beach season, the lionfish has been sighted further west, turning up in the Vendicari marine reserve in southeastern Sicily, Italy's Institute for Environmental Protection and Research reported earlier this week. 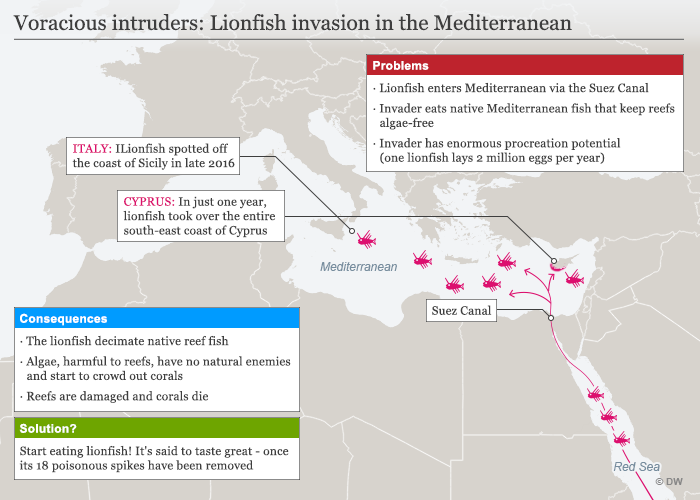 The lionfish, also known as zebrafish or devil firefish due to its striped pattern and bright coloring, can grow up to 40 centimeters (15 inches) in length. It's one of the ocean's most venomous creatures, sporting 18 sharp spines that can easily penetrate human skin.

While the venom isn't usually deadly, being stuck by a lionfish can leave behind a very painful sting that can last anywhere from a few hours to a few days.

"The lionfish observed at Vendicari represented the first known occurrence of this species in Italian waters, and its observation confirms a trend of rapid expansion through the Mediterranean Sea," researchers wrote in the scientific journal BioInvasions Records.

While researchers said the widespread presence of the lionfish in European waters is "still below the threshold of a true invasion," they stressed there was an "urgent need to take action and to promote control measures."

In the absence of natural predators, the invasive fish can easily reach very high population densities and cause significant disruption to local ecosystems and wildlife.

Introduced deliberately by humans or accidentally via the ballast waters of cargo ships, or - as was likely the case in the Mediterranean - via the Suez Canal, the lionfish has become one of the world's top conservation concerns over the last quarter century.

The lionfish has become a major threat to native species in the Caribbean Sea and the West Atlantic around Florida. Conservationists have been encouraging anglers and divers to hunt and kill lionfish to stop their spread.

Marine biodiversity under threat in Turkey

Biodiversity in Gökova Bay’s is under threat from invasive species and overfishing. Marine conservationist Zafer Kizilkaya is working to protect endangered species, like the Mediterranean monk seal and sandbar shark. (09.09.2016)

The extravagant lionfish, the tiny zebra mussel, the common trout: these invasive aquatic species may look cool - but they pose a serious risk to native ecosystems around the world. (30.03.2017)