International volunteers recycle clothes for refugees on Lesbos | Europe| News and current affairs from around the continent | DW | 26.03.2016

As Athens scrambles to implement a deal on refugees between the EU and Turkey, very little has changed for those helping refugees on the ground. Gemima Harvey reports on a special group of volunteers on Lesbos. 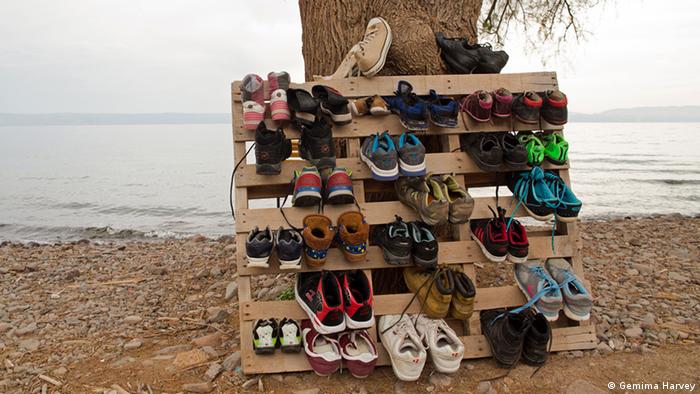 Volunteers from Greece, Syria, Spain, the Netherlands, England, the United States, Finland, Germany, Australia, Ireland and Iceland gather at the Hermes laundry in Anaxos, on Lesbos island. They glove up and sort through the wet clothes, socks and used blankets that have been collected from along the shorelines and at transit camps, discarded after aid groups provide the newly arrived refugees and migrants with the warmth and dignity of clean, dry clothes.

Once sorted through and placed into piles, the items are washed, dried and bagged, ready to be delivered to clothing distribution points all around the island, feeding the cycle with fresh clothes for dwindling stockpiles. This recycling is made possible by the Dirty Girls of Lesbos (DG) - an organization started by Alison Terry-Evans, an Australian with an enterprising spirit, in October last year.

About half of the 1 million refugees who came to Europe from across the sea last year landed on Lesbos, which has already seen 86,000 arrivals since the start of 2016. After reaching the island and having their basic needs met, they are sent to the Moria hot spot for registration before continuing on to camps on the mainland or waiting at the border with Macedonia in dire conditions, with little hope that it will open. Fleeing with the few possessions they can carry, their bags often tossed into the sea by smugglers to make room for evermore people in a perilously overcrowded dinghy, the pressing demand for a change of clothes is clear.

At the laundry about 50 tons of clothing and blankets have been washed with sterilizing detergent and dried at 93 degrees Celsius (200F) before being redistributed. Previously, these perfectly good, but wet and dirty, materials were sent as trash to landfills, adding to the already large piles of lifejackets and boat debris. 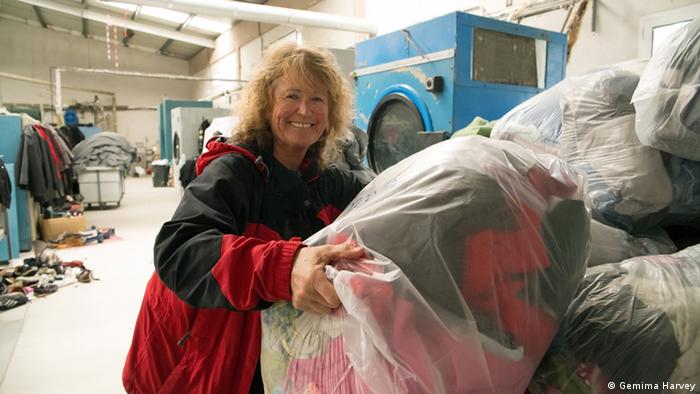 The DG, operating with the many hands of willing volunteers and funding by private donors and nongovernmental organizations, has washed and recycled about 30,000 pairs of socks. Once a week Terry-Evans organises a Sock Pinning Party. "Three pairs of same-foot size socks are safetypinned together ready for the washer and dryer. This also makes it easier to keep them together at the distribution points," Terry-Evans said. "People sit on the beach and pin dirty, smelly socks and have a lovely time. Sometimes George from Molyvos comes and plays traditional instruments and more often than not the grandmothers of the village will arrive with plates of food they've prepared."

Anna Moreton and Louise Edwards are friends who traveled together from England to volunteer. Along with matching socks and sorting clothes, the pair spent time at the DG's base at Skala Sikaminias, a small fishing village in the north of the island, scrubbing shoes and slotting them into wooden pallets to dry in the sun by the sea.

"I decided to come and volunteer with the Dirty Girls because I'm really interested in recycling and don't like waste," Moreton told DW. "I also spent three weeks at Better Days For Moria, where I worked some of the time in the clothing distribution tent. While the refugees came wearing good clothes, they would often have to accept donated clothes that were very run-down. By recycling the clothes refugees arrive in, these good clothes can then be given out again."

Lyn Kirby spent four weeks volunteering as a clothes distribution leader at Better Days for Moria (BDFM), which is an unofficial camp that sits just outside the Moria registration hot spot. She told DW that the Dirty Girls are an important and integral part of supplying clean, warm clothes to refugees and migrants on Lesbos. "During an evening shift at BDFM we could send between three and 20 bags of dirty clothes, blankets, towels and shoes to DG. These are huge bin liners, not carrier bags. At BDFM we order clothes from the warehouse when our stocks are becoming depleted. Many of these have come back into the system via DG. Although many clothes donations are received they work tirelessly to recycle and therefore prevent a huge rubbish issue. Without DG the waste would be phenomenal. Their work is highly valued."

The situation for refugees on the ground in Greece is changing as rapidly as new policies are created and Terry-Evans is looking into options for expanding operations to other parts of the country, including Athens. 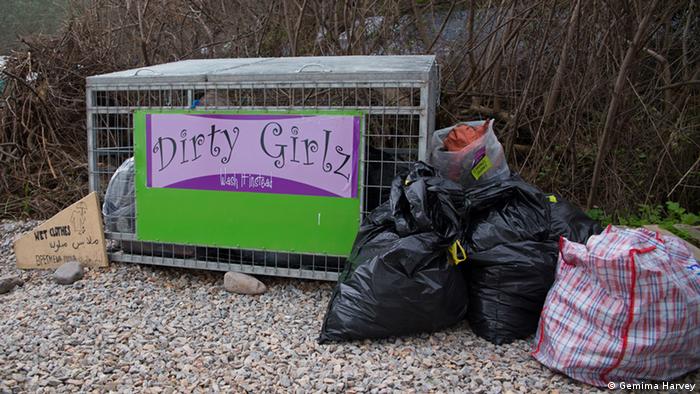 Back at the laundry sorting through stacks of clothing, checking the pockets before putting items in allocated piles, Rachael LeClear, a volunteer from Kansas, finds Islamic prayers written on small sheets of cardboard in the pocket of a child's jacket. One is a prayer for safety we are informed by another volunteer, Faisal, who speaks Arabic and translates a line, "The hardship has been great and hope has ceased, we pray to you (God) and rely on you in hardship and prosperity."

Terry-Evans has spent a lot of time on Lesbos in the past seven years, experiencing firsthand the harrowing side of the arrival of unthinkable numbers of displaced people, along with the uplifting aspects of helping them.

"There is no way to pinpoint one particular moment in a situation that is swamped with emotion. Too often we're grieving for the people we had prepared to meet and who drowned before they reached us," she told DW. "Counterbalancing all that are the wonderful people who do arrive and are so grateful for the small kindnesses that we are fortunate enough to be able to offer."