The ICC has told Ivory Coast that Simone Gbagbo, the wife of the country's former president, must face trial. Laurent Gbagbo already faces charges in connection with post-election violence in 2010. Judges at the International Criminal Court (ICC) on Thursday said Simone Gbagbo, the wife of the African state's former president, must be handed over to face trial.

Her husband and ex-Ivory Coast leader Laurent Gbagbo is currently awaiting trial in a detention centre in The Hague where the Netherlands court is based.

All three are facing charges in connection with the country's brief civil war, which left 3,000 people dead. 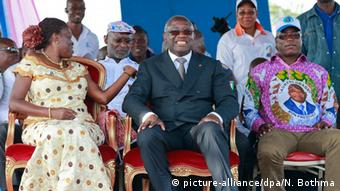 Laurent Gbagbo is being held in custody on charges including rape, murder and persecution of political opponents before his fall from power.

The authorities in Ivory Coast have refused to hand over Simone Gbagbo, saying she will be tried on charges of genocide in a domestic court.

The ICC is not allowed to try cases if domestic authorities are already taking action. 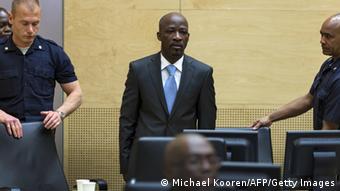 However, judges said Ivory Coast was not trying the country's former first lady for the same crimes, and that the authorities hadn't taken "tangible, concrete and progressive steps" to prosecute her. Both Gbagbos maintain their innocence.

If Ivory Coast continues to refuse to hand her over to face trial, ICC judges could refer the matter to the court's 122 member states, which may then decide to impose sanctions.