Infantino to withdraw from FIFA race if Platini is cleared

Michel Platini, who had been the frontrunner to succeed FIFA president Sepp Blatter, remains suspended, pending an investigation by FIFA’s Ethics committee. 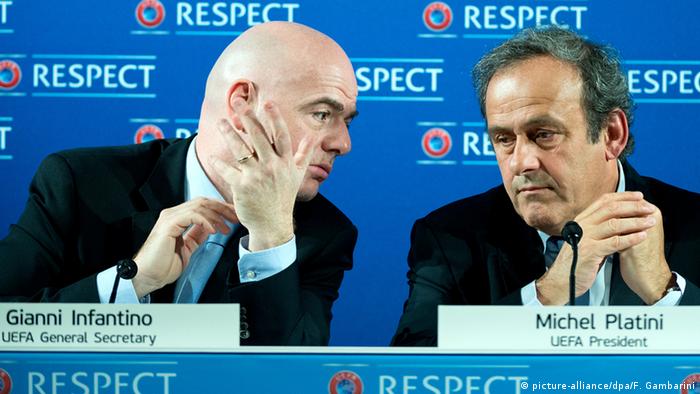 UEFA General Secretary Gianni Infantino said on Tuesday he would withdraw from FIFA's presidential election if Michel Platini, the UEFA president who is serving a 90-day ban from all football-related activities, is allowed to stand.

"Platini is my president and I've worked with him for nine years. It's clear that I have his support, otherwise I would not be running," Infantino told Italian daily Gazzetta dello Sport.

"My candidacy is not in opposition to Michel. If he is able to stand, I will withdraw. It's a simple principle of loyalty,” he said. “But right now I am a candidate 100 percent and I'm moving forward, not only for Europe but for world football."

Infantino entered the race for FIFA president in October after he got the backing of the European football authority just moments ahead of the deadline for candidates to register for FIFA's top job.

FIFA president Sepp Blatter and Platini were suspended for 90 days, pending an investigation by FIFA's Ethics committee. Platini was a candidate pegged to succeed Blatter before the suspension.

Speaking of his plans to run for world football's lead role, Infantino acknowledged he shared "lots of points in common" with Platini in relation to "development and reforms" but that he also had his own ideas.

"I am Infantino and Platini is Platini. It's my program. The priorities are the same but there will be some differences."

Seven candidates are in the running to succeed Sepp Blatter as FIFA president. The election is scheduled to take place in Zurich on February 26.

FIFA officials indicted by US over corruption

The US has charged nine FIFA officials and five business executives with corruption and conspiracy, after seven of them were arrested in a Swiss raid. The authorities suspect corruption in the 2010 World Cup bid. (27.05.2015)