Indonesian cave paintings ′revolutionized our idea of human art′ | Asia| An in-depth look at news from across the continent | DW | 09.10.2014

The discovery of 40,000 year-old paintings depicting animals and the outline of hands on Indonesia's Sulawesi Island suggests Europe was not the birthplace of art as long believed, scientists tell DW. 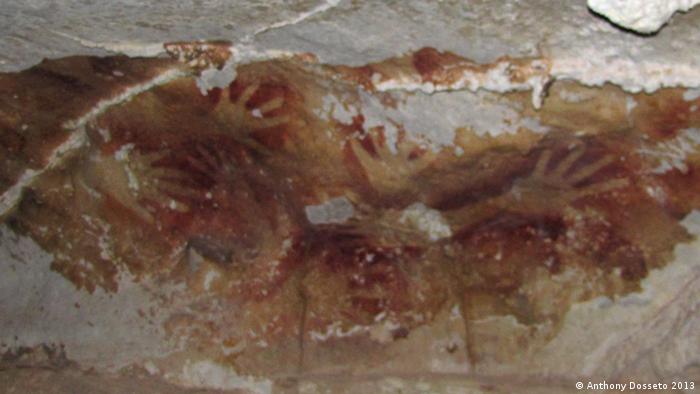 It is a discovery set to rewrite the history of art. One of the images found depicts the silhouette of a hand on a cave wall created by spraying reddish paint around an open hand pressed against rock.

But while comparable prehistoric artwork has been discovered in caves in Western Europe, it is possible that the paintings found in seven caves on Indonesia's Sulawesi Island predate the oldest-known rock art from Europe, long thought to be the birthplace of art.

Using a highly precise method to determine the age of images, a team of Australian and Indonesian researchers concluded that the Indonesian rock art is at least 40,000 years old, leaving the possibility that art either developed independently but at roughly the same time in different parts of the world or that Homo sapiens took their art knowledge with them when they left Africa, the scientists said.

Their research was published on October 8 in the journal Nature.

Anthony Dosseto, senior lecturer at Australia's University of Wollongong, who helped date the paintings and archeologist Thomas Sutikna speak in a DW interview about the historical significance of the paintings and why they are under threat.

DW: How important are the findings in terms of human art?

Anthony Dosseto and Thomas Sutikna: For many years, archaeologists have thought that Europeans were the first to produce rock art in prehistoric times. This view was based on the around 41,000 year-old rock art 'red disk' found at El Castillo in Spain. Other European rock art that mostly focused on non-figurative art, including hand stencils, have been dated to between 40,000 and 35,000 years ago. Sulawesi's hand stencil is the oldest surviving and dated example of rock art known from outside Europe, say the researchers

Sulawesi's hand stencil, with a minimum age of 40,000 years, is the oldest surviving and dated example of rock art known from outside Europe. It shows that Sulawesi's rock art - particularly the hand stencils - is equivalent in age to the earliest rock art in Europe. Therefore, the new insight obtained from Sulawesi's cave art chronologies is that early modern humans in Sulawesi were doing the same things as were occurring at the same time in Europe.

In this regard, rock art could be said to have emerged independently at about the same time in early modern human populations across the world, including in Europe and Southeast Asia. Rock art is one of the indicators of an abstract mind of the past human - the onset of what we might consider to be one of the hallmarks of 'modern' humans.

More generally, rock art is a reflection of human behavior in the past. It also could express past human experiences, such as what they encountered in the environment in which they lived.

How are these images likely to change the way we view art history?

These images revolutionized our idea of art history: until today, we thought that the birth of art was to be located in Europe, where the oldest depictions of animals in caves were found. However, our results show that 40,000 years ago, while early Europeans were producing rock art, early Indonesians were showing signs of the same flourishing artistic behavior.

When were the paintings in the caves first discovered?

Sulawesi's rock art was first reported by Dutch archaeologist Heeren-Palm in the 1950s from Leang Pattae Cave in Maros, but no one tried to date the cave art since then. For many years, archaeologists believed that it was part of the pre-Neolithic (Mesolithic) period some 10,000 years ago.

The site had originally been excavated in 1975 by Ian Glover a UK-based archaeologist who found stone artifacts, faunal remains such as dwarf bovid, primitive pigs and bear cuscus as well as red ochre (pigment) and several red hand stencils at the roof. However, nobody had been able to precisely date the rock.

How did you determine the age of the paintings?

The age was obtained as follows: trace amounts of uranium are incorporated in the mineral crusts when they are formed, and the slow but known rate of radioactive decay of this uranium can be used as a clock to date the time since the crust was formed. If the crust overlies a rock painting, then the crust will give a minimum age for the time that has passed since the painting was made, which is why many of the ages that we give in the paper are minimum ages.

In the same way, if a painting is made on top of a mineral crust, then the date of the crust will give a maximum age for the painting. It is very difficult to date paintings directly - unless they include charcoal, for example - which is why we had to use this indirect approach.

One of the reasons for which the sites we have dated are unique is that, in many cases, we were able to date mineral crusts that underlain and overlain the paintings, thus really bracketing the age of when the rock art was produced. Dating was made possible by a collaboration between the Wollongong Isotope Geochronology Laboratory at the University of Wollongong and the Research School of Earth Sciences at the Australian National University.

How were the paintings made?

Most of the Sulawesi's rock art was created using red ochre to produce red and mulberry colored paintings.

How are the Indonesian cave paintings different from the ones found in Europe?

What else do the Indonesian paintings depict?

Generally, the oldest of Sulawesi's rock art is characterized by red and mulberry-colored hand stencils, as well as several figurative animals that look like naturalistic paintings. The figurative animals include some endemic fauna that had existed in Sulawesi for tens of thousands of years, such as warty pig (Sus celebensis), the primitive 'pig-deer' (Babyrousa sp.), and the dwarf bovid Anoa. 'An additional threat to the paintings may come from the growing interest people will have in visiting this region,' the scientists warn

Are the paintings under threat from erosion?

While many sites still preserve beautiful examples of rock art in this region, many others may have been destroyed by erosion.

Now, with the publication of this work, an additional threat may come from the growing interest people will have in visiting this region.

Fortunately, in 2009 the Ministry of Culture and Tourism of the Republic of Indonesia has submitted an application to place the Maros-Pangkep region - where the archaeological sites are located - on the UNESCO World Heritage List. Hopefully, our work will contribute to the approval of this proposal.

Anthony Dosseto is senior lecturer at the School of Earth and Environmental Sciences of Australia's University of Wollongong. Thomas Sutikna is an Indonesian archaeologist currently research at the same university.