Indonesian officials have said the death toll from a military plane crash could rise over 140, after it went down in a residential area. The disaster has raised questions about aviation safety in the archipelago nation. 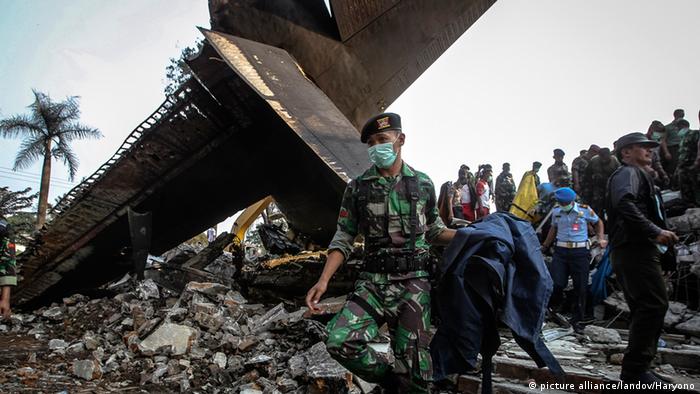 The death toll from the crash rose on Wednesday, with more people believed to have been on board the plane than initially thought.

The Indonesian air force revised the number of people on board the plane up to 122, which included 12 crew. The plane crashed and exploded into a ball of flames in the Sumatran city of Medan.

Initially they had said there were 113 people on the aircraft, but personnel and their relatives may have embarked and disembarked at stopovers in Pekanbaru, Dumai and Medan, after the plane took off from the capital, Jakarta.

Police told the AFP news agency on Wednesday that the total number of bodies recovered stood at 141, indicating a growing list of victims from the neighborhood where the plane went down. An air force spokesman told the Reuters news agency that 142 body bags had been deliver to a hospital in Medan.

The plane - a Hercules C-130 - crashed into a newly-built residential part of the city of two million people, plowing into a massage parlor and a hotel. Search and rescue officials previously said at least three people on the ground had died.

Rescue teams were using heavy machinery as part of their search for bodies in the rubble, holding out little hope that survivors would be found.

Although the plane was 51 years old, the military insisted it was airworthy. However, all similar models would be grounded pending an investigation.

The crash has yet again thrown a spotlight onto Indonesia's poor record when it comes to aviation safety.

"There must be an evaluation of the age of planes and defense systems," President Joko Widodo tweeted late Tuesday.