Indonesia: Jakarta enjoys deep culinary connection with China | Asia | An in-depth look at news from across the continent | DW | 13.01.2022

For centuries, Indonesians and the Chinese have had a long, complicated relationship. Nevertheless, in Jakarta, they mingled and intermarried — and so did their cuisines. 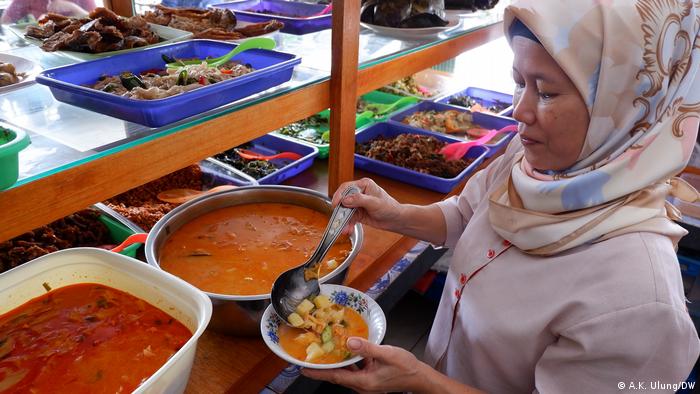 The Betawi people of Jakarta, including Yusri Khoiriyah (pictured) are proud of their unique blend of culinary traditions, which were highly influenced by Chinese immigrants

Chinese Indonesians, who are usually atheist, Christian, Buddhist, or follow Confucianism, make up less than 5% of the 260 million people in the world's largest Muslim-majority country.

Many of these ethnic Chinese have lived in Indonesia for generations. The majority are of mixed (peranakan) heritage, do not speak Chinese, and have Indonesian surnames.

Today, anyone who was born an Indonesian citizen — and never held citizenship in another country over the age of 18 — is officially considered to be Indonesian.

Throughout the years, however, ethnic tensions still flared between minority and majority groups.

In 2017, Basuki Tjahaja Purnama, the former governor of the Indonesian capital, Jakarta, was jailed for blasphemy.

Purnama, a Christian, was Jakarta's first non-Muslim governor in 50 years. His conviction sparked protests on both sides of the issue. He was released early in 2019.

Despite the occasional flare ups, there has always been one sure place where the two cultures have mixed in near perfect harmony — the kitchen.

The thriving capital of Jakarta is home to about 10.5 million people from various ethnic backgrounds.

Besides the local ethnic group, known as the Betawi, traders and migrants from Java, China, Europe, North Africa and the Middle East all made their marks on the city as early as the 15th century.

Intermarriage with Indonesians resulted in the development of distinct dialects, customs and cuisines.

"Our society was historically very open to new cultures," Agni Malagina, a sinologist and expert on the Chinese community in Indonesia, told DW.

The Chinese came to Indonesia not only for trade, but also to strengthen the relationship between the two regions, Malagina said.

In the early days, the Chinese and the Betawi people in Jakarta — then known as "Batavia" —  lived in harmony, she added. And food played an important role.

The Chinese and the Betawi, as well as many other ethnic groups, came to accept each other's traditional foods as part of their own culinary identity, Malagina said.

One of those foods is a beloved salad dish known as gado-gado. The dish, which includes ingredients such as tofu, peanuts and garlic, was brought to Batavia by Chinese immigrants during the 15th century.

Soy sauce, another Chinese ingredient, also eventually became a staple in Betawi food. As did peanuts, which were brought to old Jakarta by Chinese immigrants in 1755.

Indonesian cuisine is "no longer Chinese food or Indian food or Javan food, it's about togetherness," Malagina explains.

"Since coconut milk and some local spices were easily available, they [the Chinese] tried to combine it with their own comfort and familiar food such as noodles," Pridia told DW. "As time went by, locals remade the dish and called it laksa Betawi."

Fadly Rahman, an historian and lecturer from Padjajaran University in West Java Province, says an ancient inscription found in the city with the words hang laksa — meaning "people who sell laksa" —  can be traced back to the 15th century.

Back then, many Chinese immigrants sold the coconut noodle dish to earn a living in their new home city, Rahman explained. 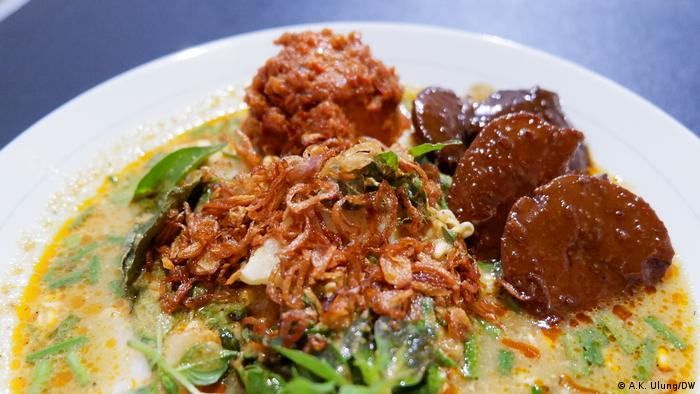 Laksa Betawi, a Chinese-Betawi fusion of coconut milk and noodles, has been hailed a cultural heritage of Jakarta

Not much has changed since then, it seems. The Jakarta government has listed some 20 beloved Betawi dishes as part of its cultural heritage —  among them laksa Betawi.

It's not so easy finding Betawi cuisine in the capital these days. Complex recipes, long cooking hours and rare ingredients mean dishes like sayur besan are slowly fading away and replaced with fast foods and street food.

But there are still a few Betawi family-run eateries remaining in Jakarta. One of them is Suhaer Be'eng, owner of a small Betawi restaurant in Depok, southern Jakarta.

"Most dishes in the restaurant are inherited from our grandparents," Yusri Khoiriyah, Be'eng's daughter, told DW.

Every day, Khoiriyah starts her day just before dawn to prepare a number of Betawi dishes.

One of her family specialties includes sayur besan, a  dish originally reserved for Betawi weddings and engagement parties. Sugarcane blossom, one of its key ingredients, is becoming increasingly expensive and hard to find.

For Ahmad Syihabbudin, the owner of the Laksa Betawi Asirot restaurant in south Jakarta, says he still uses his grandmother's recipe from 1972.

His main challenge is to maintain the taste and quality of his dishes.

"The most complicated part is during the spice mixing process, it feels like we almost use all kinds of spices," he told DW. "For the rice cake itself, I need about 12 hours to boil it."

Syihabbudin starts cooking every day at 3 a.m. so that his dishes are ready for sale at around 9 a.m.

"From culinary, we can learn the long history of acculturation. It was an extraordinary process because people from all sides understood and adapted each other," sinologist Malagina says.

"Indonesian spices are rich, and foods are diverse because of many influences from the outside."

Each year, several million wild frogs are sold in supermarkets around the world. A study suggests most species aren't labeled correctly. The trade in frogs' legs is out of control, the authors warn.