Indonesia cracks down on condom sales on Valentine's Day

The restrictions on Valentine's Day come as some have warned of the growing influence of religious hard-liners. Local authorities in parts of Indonesia say the holiday is against cultural norms. 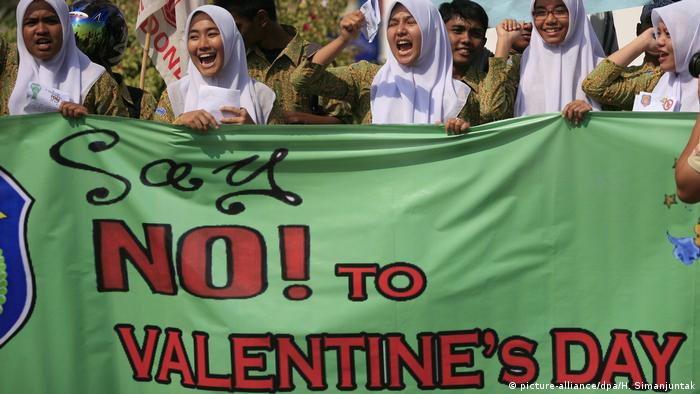 On Tuesday, authorities in parts of Indonesia cracked down on condom sales and banned students from celebrating Valentine's Day, saying the romantic holiday encourages unmarried sex and is against cultural norms in the world's most populous Muslim country.

A court in Islamabad has banned open celebrations of the holiday. Politicians and private citizens alike have voiced wariness over adopting holidays from other cultures. (13.02.2017)

Police have arrested five people in connection with an attack on a church in Indonesia in which a small child was killed. They are looking into possible links to the so-called "Islamic State" (IS) group. (14.11.2016)

Indonesia's upcoming regional elections have been overshadowed by Muslim mass protests against the candidacy of Jakarta's Christian governor Ahok. The country is on a dangerous course, says Berthold Damshäuser. (13.02.2017)

Police in the city of Makassar on Sulawesi Island raided supermarkets and seized condoms as part of an operation to warn against selling contraceptives to teenagers and unmarried people.

"These raids were done after we received reports from residents that the minimarts were selling condoms in an unregulated way, especially on Valentine's Day," Makassar police official Jufri was quoted as saying in a media report.

The city's mayor, Mohammad Ramdhan Pomanto, was quoted in local media as saying condoms were being sold "as if they were candy." He warned stores selling condoms to unmarried people that their licenses could be revoked. Last year, the mayor ordered stores to sell condoms only to married people.

Indonesia is a secular country that guarantees freedom of worship for six religions in its constitution, but observers have warned of creeping Islamization in a country with large Hindu and Christian minorities.

Most of the country's 220 million Muslims practice a moderate form of Islam, but conservative forms influenced by the Middle East have become more popular across the archipelago in recent years.

Under Indonesia's decentralized form of government, regional powers are given authority to issue bylaws without central government approval.  Several provinces, including West Java and Aceh, which is the only province to implement sharia law, have issued restrictions or bans on Valentine's Day in the past.

In Indonesia's second-largest city, Surabaya, schools were ordered to ban students from celebrating Valentine's Day "in or outside of school," because it runs counter to "cultural and social norms." A similar order was sent to public schools in West Java, the country's most populous province. 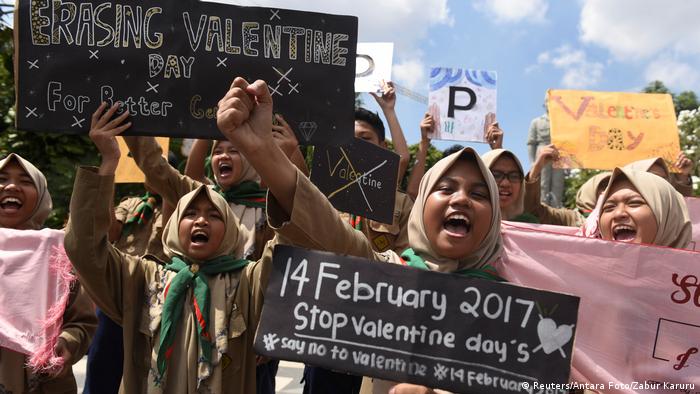 Valentine's Day this year falls a day before the capital, Jakarta, goes to the polls to elect a new governor in a vote widely viewed as a test of the country's religious tolerance.

Basuki Tjahaja Purnama, an ethnically Chinese Christian, is running for re-election in a campaign marked by accusations that he insulted the Koran. The claims have led to hardline Islamic protests and a trial for blasphemy. The case has been criticized as unfair and politically motivated.

Purnama is going up against two Muslim candidates, and his opponents have repeatedly urged people not to vote for him because he is not a Muslim. Tens of thousands of conservative Muslims have in recent weeks rallied at mosques against Purnama, whose lead in the polls has slipped.

If he loses the vote because he is not a Muslim and is jailed for blasphemy, analysts say, it would be a blow to the country's reputation as a pluralist democracy.

"This is going to be a litmus test of Indonesian Islam: Are we tolerant or intolerant?" Tobias Basuki, a political analyst from the Jakarta think tank the Centre for Strategic and International Studies, told AFP.

An Islamic school near the city of Yogjakarta in Indonesia is teaching deaf and hearing impaired children and young adults to recite the Koran using sign language. For many it is the first time they have been given such an opportunity.

The Istiqlal Mosque in Jakarta has become the first place of worship in the world to be certified as an environmentally friendly place of worship by the International Finance Corporation. The initiative is meant to encourage religious practitioners to engage in eco-friendly practices.