Indonesia combines Islam with environmental activism | Asia | An in-depth look at news from across the continent | DW | 14.06.2018

The Indonesian government and Greenpeace have partnered with Islamic organizations to promote plastic waste reduction. Can including religion make environmental campaigns more effective? 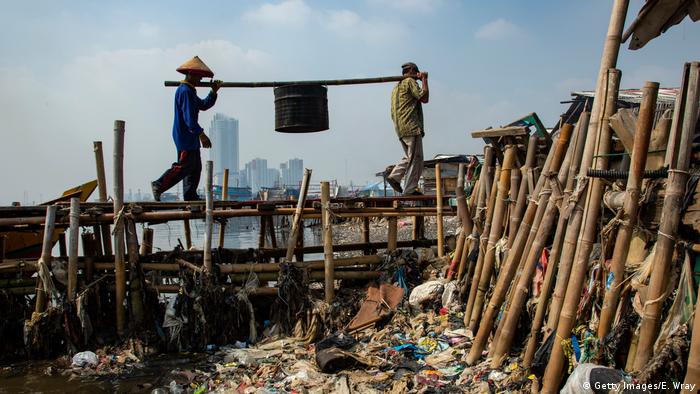 Indonesia's top Muslim clerical body, the Indonesian Ulema Council (MUI), together with Greenpeace and the Indonesian Ministry of Forestry and Environment are cooperating on an awareness campaign during Ramadan to solve the problem of plastic waste in Indonesia.

Together, they have a mission to promote the use of reusable bags to cut plastic bag use in Indonesia. The Indonesian government and clerics from the country's largest Muslim organizations, Nahdlatul Ulama (NU) and Muhammadiyah are seeking to influence the consumer behavior of the groups' combined 100 million followers.

NU and Muhamadiyah, together with the Indonesian Ministry of Forestry and Environment, announced the Plastic Waste Reduction Movement in Jakarta on June 6.

According to Rosa Vivien Ratnawati, the waste management director at the Indonesian Ministry of Environment and Forestry, the amount of plastic garbage in Indonesia is continuing to increase significantly.

"We want to encourage citizens to start from small things like carrying a tumbler, instead of disposable plastic bottles, or using non-plastic shopping bags," she said.

During the 2018 Ramadan, the Indonesian ministry of environment and environmental organizations are busy inviting religious leaders to popularize breaking Ramadan fasts without plastic.

Greenpeace Indonesia said it wants to use the influence of religion through the MUI to spread the message of environmental conservation and invite Muslims to stop using disposable plastic.

Greenpeace launched its #PantangPlastik (#AntiPlastic) campaign by holding a gathering dubbed "eco-iftar" in South Jakarta, last week. Iftar is the evening meal with which Muslims end their daily Ramadan fast at sunset.

Muharram Atha Rasyadi, a Greenpeace urban campaigner said Indonesians tend to consume more during Ramadan. For example, many people gather to break fast at restaurants or order take-away food. As a result, the amount of trash increases.

Read more: 100,000 deaths due to forest fires in Indonesia: study

Exploring Sumatra, land of the orangutans

"In mosques, for instance, at the end of the day during Ramadan, people break fast together by using many disposable plastic food containers," Rasyadi told DW, adding that Greenpeace recognized the need to include Islamic religious organizations to reach ordinary people.

He explained it is important to invite imams to campaign together for the environment.

"In contrast to urban popularions, people in rural areas tend to obey what clerics say."

Rasaydi expects that the "eco-iftar" event would inspire Muslims to consume less single-use plastic in their daily activities.

Indonesia is currently listed as one of the largest sources of waste pollutants in the world. Every year, the average Indonesian dumps 17 kilograms (37 pounds) of plastic waste in various forms. As a result, 187.2 million annual tons of plastic waste from Indonesia ends up in the ocean.

Is religion effective for activism?

Religion has previously been used as a vehicle for conservation in Indonesia. In 2014, MUI issued a fatwa (Islamic legal opinion) that forbid poaching of endangered species. And the Islamic Foundation for Ecology and Environmental Sciences, also brought in Indonesian schools to campaign for the so-called School4Trees program.

According to Media Zainul Bahri, a professor of religious studies, at Syarif Hidayatullah State Islamic University (UIN) Jakarta, Islam has many messages about environmental preservation.

"There are many threats in the Quran regarding environmental issues. God blames people if they cause environmental damage," he told DW.

According to Bahri, these messages tend to be forgotten because many think there were "no environmental problems" when compared with today.

"The teaching themes of the 1950s to the present are more about theologically centered issues of humanity," he said.

Religious conservation around the world

Religion has played a role in saving the environment in other countries. In 2008, the secular ideological conservation group The Alliance for Religions and Conservation (ARC) launched an environmental project by engaging local religious leaders to invite fishermen to stop using explosives for fishing on the island of Pemba, Tanzania.

"This conservation idea isn't from the West," said a fisherman who took part in a conservation program in an interview by The Christian Science Monitor. "It's from the Quran."

While religion can play an important role in raising awareness, the involvement of conservation organizations is necessary for religious leaders to deal with technical issues.

"Many imams do not have a sufficient understanding of how nature works and how to take care of the ecosystem," said Bahri.

"The point is we want to invite people to realize that this commitment is also something Islamic," the waste bank director of the NU's Disaster Mitigation and Climate Change Agency (LPBI NU), Fitria Ariayani, told Indonesian media.

The Komodo dragon has powerful venom that helps make it the top predator on the few Indonesian islands it inhabits. But it also likes to play and its blood could help develop new antibiotics. (27.09.2017)